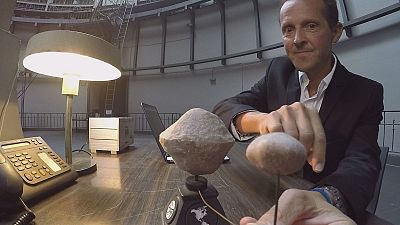 In the edition of Space, Euronews correspondent Jeremy Wilks reports from the Observatory of the Côte d’Azur in the south of France on a unique mission to deflect an asteroid.

Asteroids have the potential to cause a catastrophe – a small asteroid could wipe out an entire city, while a large one could mean the end for us all.

It’s a threat we’re aware of, and which scientists and engineers are working to overcome. Among them is leading expert Patrick Michel, from the Observatory of the Cote d’Azur.

“An asteroid is a small rock which is one of the bricks left over from the formation of our planets. Some of them are dangerous, because although most are out there between Mars and Jupiter, in what we call the asteroid belt, there are some that have a trajectory that crosses that of Earth. And those are the ones that pose a threat,” he points out.

It’s a threat that’s limited – a sizeable asteroid strike only happens every ten thousand years or more- but it’s a threat to be taken seriously.

“Even if the frequency of impact is very low, like the probability of winning the lottery is very low, but there are those that do win,” adds Patrick Michel.

With that threat looming above us, the world’s space agencies are swinging into action.

Just recently two missions, one American, and one Japanese, set off to visit asteroids, and bring back samples to be studied on Earth.

Now ESA and NASA are planning to try something that’s never been tried before in a joint project called AIDA.

“AIDA is I think the most audacious mission after Rosetta. It’s a mission where we plan to test for real a mitigation technique called kinetic impactor, to actually test if we can deflect asteroids. This is the main objective of this international cooperation between ESA and NASA,” explains Ian Carnelli, AIM project manager.

The mission outline goes like this: ESA’s AIM spacecraft launches in the year 2020 to an asteroid system called Didymos, in which a large asteroid is orbited by a small asteroid dubbed Didymoon.

It surveys that moon, and then six months later NASA’s DART spacecraft arrives and smashes into Didymoon, while AIM records what happens.

“The impact will be spectacular. DART will arrive at about 6 kilometres per second. AIM will be at about 100 kilometres distance to make sure we’re away.

‘The difference that DART will make is to change the speed of the moon around the main asteroid by about half a millimeter per second. This is very small. But it will generate a change in time of about 10 minutes over 11 hours, and this we can measure very accurately,” he stresses.

Before that can happen there’s a lot to learn.

At ESA’s technical centre in the Netherlands the engineers are simulating the scene that the AIM spacecraft will encounter when it arrives at the asteroid.

Right now we know that the small Didymoon orbits the larger asteroid, but we don’t know much else.

“We have a rough idea of how it looks like, and from what we’ve observed this is how we think it more or less looks like, but the operative word is on ‘more or less’, we’re not entirely sure. And we won’t be sure until we get there,” says Irene Huertas, Guidance, Navigation and Control Engineer, SERCO for ESA.

Irene uses this facility to set up the spacecraft’s camera to be ready to do a thorough job of observing the impact.

“We can shoot different scenes with darker asteroids, lighter asteroids, a very rocky surface, a very smooth surface, a combination of both. A darker moon, a lighter main body.

However objects the same size as the little moon could mean trouble if they’re heading in our direction.

“Didymoon is about 163 metres in diameter, and this is a very interesting size, because it’s representative of a type of asteroid that if it were to hit the Earth would generate casualties, independently of the impact point. So if it’s in the middle of the ocean it would generate a tsunami, and if it’s any place on surface, on the ground it will reach inhabited areas, so it’s a very important type of asteroid,” explains Ian Carnelli.

Back in Nice and asteroid expert Patrick Michel underlines that this mission is a true experiment.

We’ve made simulations, but we really don’t know if we can deflect an asteroid.

“The response of an object to an impact depends a great deal on its internal structure. If my target is a metal bar the response won’t be the same as if my target is a sponge. So thanks to the AIM spacecraft we’ll know exactly what this object is made from, and we can validate all the digital simulations of the impact, and better interpret the results of it,” says Patrick Michel.

What follows, it’s hoped, will be a whole raft of asteroid deflection missions, perfecting out technique so we’re ready when a true menace appears on the horizon.

“Asteroids are a genuine threat to consider, because even if we don’t have to worry in the short term, it’s the only threat from nature that we can predict, and against which we can do something.” concludes Patrick Michel.