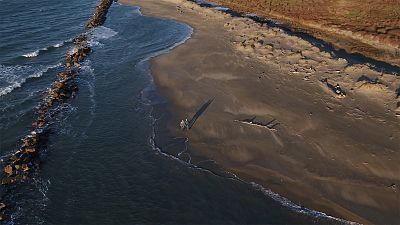 The most recent trends in sea level size mean the low-lying Camargue region of southern France could be submerged by the sea by the end of the century.

The sea walls built along the coast in the 1980s have already been broken by the waves, as a combination of rising waters, slowly sinking landmass, and reduced amounts of sediment from the Rhone river spell trouble for this environment.

Anis Guelmami uses Europe's Sentinel satellites to study wetlands like the Camargue, and he tells us the latest news from space: "The figures that we have in recent years, which come from altimetry satellites that measure the elevation of the sea level, show us that this elevation is even larger than the figures that we had beforehand. So here we're talking about 4.8 millimetres per year, which is very alarming compared to what we had before, which was around 3.4 millimetres per year."

Anis studies satellite images to quantify coastal changes around the Mediterranean using Europe's Sentinel satellites and NASA's Landsat spacecraft, and has found that certain areas of the Camargue coastline have been pushed back by 200 metres in the past three decades.

"Sea levels could rise by a metre, perhaps over two metres by the end of this century, and when you think that the Camargue is about one metre above sea level you can very well imagine the consequences of that kind of sea level elevation."

Satellites are now the mainstay of scientific efforts to study climate change and the environment.

They study ice coverage, observe deforestation, land use and soil moisture, track trends in sea level rise, temperature and salinity, and even emissions from megacities.

Data from the seven Sentinels and four Earth Explorers already in orbit is managed at the Agency's Earth Observation centre near Rome in Italy.

The Sentinels tend to fly in pairs. Michael Rast, Head of Earth Observation Science Strategy at ESA explains why.

"Through the fact that we have the sister pair Sentinel-2A and 2B flying at the same time, we have chosen the orbits such that they obtain the best revisit. So we are basically able to cover the global Earth in five days without any gap by Sentinel."

"The frequency and consistency are very important for managing our environment and for giving the decision-makers the key on what is changing, what is rapidly changing, and where does mankind or human-kind have to change their practices," Rast explains.

The changes the satellites see result from higher CO2 in the atmosphere, levels which have always varied, but are now far higher than ever measured before:

ESA's Director of Earth Observation, Josef Aschbacher, points out that CO2 concentrations in the atmosphere have varied a great deal over the last 800,000 years, the period for which we have ice-core records.

Aschbacher continues: "This is what we have today, this is the increase in carbon dioxide, drastically increasing over the past 100 years, caused by human beings."

The Camargue beats a retreat

In the Camargue, those who study and care for this fragile coastal environment are facing up to the reality of climate change. Anaïs Cheiron runs the nature reserve at the heart of this French national park, and tells Euronews that "nature is resilient, it knows how to adapt, but it knows how to adapt in a system, with evolution, and in a time-frame that is not at all the time-frame that we have here today."

Now the decision has been taken not to build new sea walls to try to protect this area.

"In the wild areas of the Camargue we've decided we won't fight against the erosion of the coastline, against the effects of the sea," Cheiron says.

"We've chosen instead to retreat, to beat a strategic retreat, and to adapt rather than to fight against the coastal erosion and the rise in sea levels."

The Camargue is just an example of what's happening. Global sea levels have risen on average 25 centimetres since the year 1900. Levels are expected to rise considerably faster in the next century.

Jean Jalbert explains how the questions that the Camargue is now being confronted by will soon be being asked of city mayors and governments all around the globe.

"What's happening here is happening everywhere on our planet. And you have to think that here it's a few tens of thousands of people who are affected."

"In mainland France there are around 740,000 hectares, more than 300,000 buildings which are located at under one metre above sea level," Jalbert says.

"On the scale of the planet there are more than 370 million people who live less than 5 metres above sea level. There are 136 megacities - New York, Tokyo, Osaka, Lagos - which are right on the water."

"We are going to face major problems, and we won't have the means everywhere to be able to defend those areas. So we're going to have to learn to resist in some places, but very often to retreat, and to adapt to this climate change and its effects,"he concludes.

Those changes and effects will continue to be measured and monitored by the fleet of satellites 700 kilometres above our heads.

Climate Update: endless summer for some, a chilly deluge for others

Surfing scientists and algae hunters use Sentinel-3 to study coastline

Changing climate and environment: Copernicus, or Europe's eyes on earth… and our future