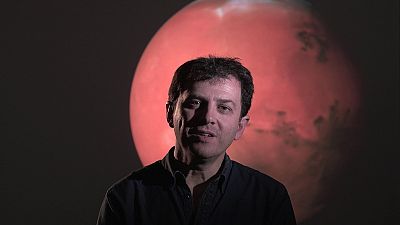 Francois Forget is a researcher at the CNRS in Paris, and member of the ExoMars 2016 team. He is especially interested in the climate and atmosphere of the red planet.

“Unfortunately the Schiaparelli lander crashed onto the surface of Mars,” he tells Euronews. “The scientists are disappointed because it should have spent several days on the surface taking unprecedented measurements of things like the magnetic field.”

“Thankfully the main part of the scientific mission of ExoMars 2016 is on the satellite, the Trace Gas Orbiter which is equipped with a camera which will allow us to investigate what’s happening at the surface, the mist, the dust storms, all those aspects,” he says.

With TGO moving into position, he explains that “the idea is not just to do meteorology, it’s to investigate what’s happening inside the planet. We wonder if there might still be volcanic activity, geochemical activity, or even biological activity underground, thousands of metres underground.”

To find out more, the spacecraft will scan and sniff the Martian atmosphere: “The trick is to detect molecules in the atmosphere that could be emitted by this activity. And thanks to the very sensitive spectrometers we can detect them in very, very low quantities,” Forget explains.

Can we deflect asteroids?