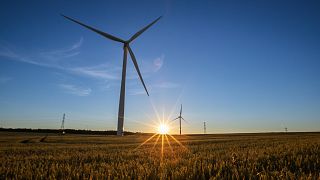 UK ministers have hinted that Prime Minister Rishi Sunak could back down over a ban on onshore wind farms.

Planning rules were tightened by the former government, under Prime Minister David Cameron. These rules have effectively stopped new onshore wind farms from being built since 2015.

Now Business and Energy Secretary Grant Shapps has indicated that the government could u-turn on lifting the moratorium.

“We already have quite a lot of onshore wind,” he told Sky News today (28 November) “There will be more over time, particularly where communities are in favour of it.”

“That is, I think, the key test of onshore wind - is it of benefit to communities locally?”

Shapps also claimed that this had been the Prime Minister’s position all along.

But during his unsuccessful summer campaign to become Conservative Party leader, Sunak released an energy independence plan that promised: “to scrap plans to relax the ban on onshore wind farms in England.”

It said that this was “in recognition of the distress and disruption” they can cause and provide “certainty to rural communities.”

There has been increasing pressure from a growing group of Conservative MPs - including former Prime Ministers Boris Johnson and Liz Truss - for the moratorium on onshore wind to be lifted.

An amendment to the Levelling Up Bill has been proposed that would give the government six months to change planning laws to allow wind farms in rural areas and repower existing projects where there is community consent.

COP26 President Alok Sharma is one of the MPs backing the bid to lift the ban.

“Onshore wind is one of the cheapest forms of renewable power and will help to bolster the UK’s energy security,” he tweeted over the weekend.

He went on to say that, where communities welcome it, onshore wind should be kept as an option.

“Putin’s illegal and brutal war in Ukraine has reinforced that climate & environment security are totally interlinked with energy and national security.”

To deliver the UK’s target to reach 100 per cent clean energy by 2035, Sharma said that faster deployment of renewables - including onshore wind - is needed.

The Labour Party has also signalled its support for the amendment which is in line with its plans to lift the ban on onshore wind farms.

"Lifting the ban on onshore wind in England is a no brainer," says Friends of the Earth’s head of policy, Mike Childs.

"It’s cheap, clean, plentiful and popular with the public – and has a key role to play in tackling the cost-of-living and climate crises."

Childs added that earlier this month, Sunak pledged to make the UK a clean energy superpower.

"It's time to start delivering."

Shapps denied that the government was backing down due to fears that it would lose a vote in parliament on this amendment but it will take a closer look at the details of the proposed amendment to the Levelling Up Bill.