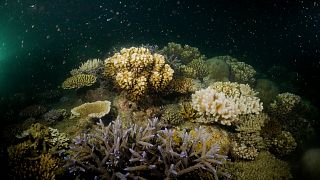 The corals spawned for the first time since they were planted four years ago.   -   Copyright  Reef Restoration Foundation
By Hannah Brown  •  Updated: 27/11/2022

Corals grown in Australia’s first offshore coral nursery have spawned for the first time after being planted on the Great Barrier Reef four years ago.

They were grown as part of a project by the Reef Restoration Foundation to help rebuild degraded parts of the reef on Fitzroy Island - 29km from Cairns in North Queensland.

What is coral spawning?

Spawning is the release of thousands of eggs and sperm which leads to the creation of new corals. The phenomenon usually happens in October and November after a full moon.

“We saw the little pink egg and sperm bundles get released from our outplants and the ocean looked like an underwater snowstorm. It was beautiful,” says Hannah Kish, a Marine Biologist with the Reef Restoration Foundation.

The discovery in Welcome Bay on Fitzroy Island delighted the team as it means the planted corals are healthy, settled and thriving.

“And it’s actually going to contribute to a much bigger ecological impact. As our coral spawn, it ensures that the reef will be self-sustaining in the long run,” explains Azri Saparwan, Master reef guide and Marine Biologist for the Reef Restoration Foundation.

Rebuilding the reef with coral cuttings

Reef Restoration Foundation’s chief executive officer Ryan Donnelly said a coral farming expert and three marine biologists recorded the event at the inshore reef. It signals the start of coral spawning on the Great Barrier Reef and the outer reef is expected to reproduce next month after the full moon too.

The corals were grown on underwater frames after the Great Barrier Reef Marine Park Authority granted a permit for a pilot research offshore nursery at Fitzroy Island in 2017.

Cuttings were made from healthy organisms and attached to ‘coral tree’ frames suspended underwater. The team used techniques pioneered at reef restoration sites in Florida. These cuttings grow faster in the nursery setting which allowed the team to plant them onto a hard substrate after about six months.

As the cuttings establish themselves, other coral species also grow and marine life including invertebrates, colourful tropical fish and turtles become part of the habitat.

“We planted coral cuttings in a degraded patch of reef and these pioneer species have grown to around 1 metre in diameter helping to create a healthy and complex habitat for various corals and marine life,” Azri Saparwan adds.

“Watching our coral babies reproduce for the first time to create the next generation of corals was a beautiful and humbling experience. The spawning was a showcase of how the Great Barrier Reef generates new coral recruits each year as part of its regeneration process.”

Watch the video above to witness the spawning in action.