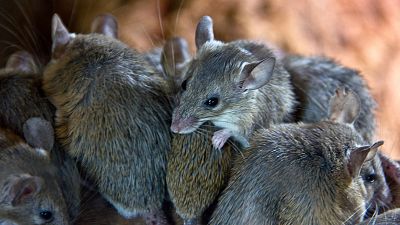 At her home in Rockford, Illinois, Rita Davisson said the “one or two” mice she normally sees during the waning winter months “have turned into more like 10 or 15” in the last couple years.

Scientists say the warmer weather might have something to do with it.

The 66-year-old said the influx prompted her to contract a pest control service for the first time in the more than 30 years she’s lived in her house.

“They’re sneaking around the basement, the garage, my backyard,” she said. “The one trap I have just hasn’t been enough lately.”

Researchers say warming temperatures and milder winters have increased the population of the white-footed mouse, the most abundant small rodent found throughout much of the eastern US and Canada, meaning more work for pest control experts.

Above-average temperatures were recorded across most eastern and central US states last winter. Since 1970, average winter temperatures have increased by at least one degree Fahrenheit (0.6 Celsius) in every state, with states in the Northeast and the Great Lakes region warming by more than 3 degrees F (1.7 C).

Researchers say warming temperatures and milder winters have increased the population of the white-footed mouse.

“These small mammals spend their whole lives shivering. They lose heat so fast,” Floyd said. “When you get a milder winter, they’re going to survive better. The mice don’t have to shiver as much, and they’re also less likely to die from starvation because they have more ability to hunt for food.”

Susan Hoffman, associate professor of biology at Miami University in Oxford, Ohio, said the white-footed mice have migrated past a transitional forest region that has long served as a dividing line for many species, noting that they’ve expanded “surprisingly fast” in North America — about 125 miles in 30 years, 15 times further than previously expected.

The white-footed mouse, which has historically proliferated from the Tennessee Valley through the northern Atlantic Coast, has already expanded its northern limit into Québec, Hoffman said.

By 2050, the mice population is predicted to have migrated north in even greater numbers, especially as the warming climate pushes their preferred forest habitats farther north, too.

This migration also has been documented with other species, including chipmunks, flying squirrels and meadow-jumping mice, she said.

Scientists say the rodents’ spread could mean more mice in and around homes.

Right now, I would say 30% to 40% of our calls involve mice, which is pretty surprising given the time of year. They’re just adapting and expanding more...and there’s more of them.

That’s already the case in Indiana, where Allie Dickman, a director at AAA Pest Control, said technicians saw an uptick in mice calls this winter. Calls for more mice services at rural and suburban homes, as well as in urban buildings, have continued into the spring.

“Right now, I would say 30 per cent to 40 per cent of our calls involve mice, which is pretty surprising given the time of year,” Dickman said. “They’re just adapting and expanding more … and there’s more of them.”

What about the implications on human health?

Experts also warn of even greater public health implications, given that white-footed mice are natural reservoirs for Lyme disease bacteria, which can then infect ticks that are capable of transmitting Lyme disease to people.

The bacterial illness that can cause fever, fatigue, joint pain, and skin rash, as well as more serious joint and nervous system complications, is the most common vector-borne disease in the US.

Maine, Vermont and New Hampshire have so far experienced the largest increases in reported cases, which the US Environmental Protection Agency has attributed, in part, to climate change.

53-year-old Elliot Smythe, who owns a farm near Randolph, Vermont, said he’s paying more attention to the growing numbers of mice and ticks and the property after his 15-year-old son contracted Lyme disease last fall.

“Living in a more rural area like I do, I didn’t mind mice that much,” Smythe said. “But when they keep coming, and they turn into a nuisance ... well now I have a problem.”

Over time, the northward shift of mice could mean that more southern regions of the US will see fewer rodents, Floyd said, but areas in the Midwest, New England and Canada could see them in greater numbers.

“We’re going to need more research to understand better where and how fast (the mice) are moving,” he said. “We’ll also need to learn more about how wetter conditions from climate change could also play a role. There’s a lot more to learn.”