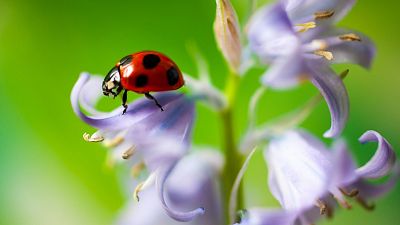 The number of flying insects has declined by nearly 60 per cent in less than 20 years, an alarming new survey has found.

The huge drop threatens our entire ecosystem, scientists behind the study have warned - but we can still turn things around.

What do the survey results show?

Using data uploaded by members of the public through the Bugs Matter app, scientists from conservation trust Buglife counted the number of bug ‘splats’ on car number plates across the UK.

The researchers compared results from nearly 5,000 journeys in the summer of 2021 with a similar study from 2004.

The findings were extremely troubling.

In England, the number of squashed bugs declined by 65 per cent. Welsh data showed a 55 per cent decline, while Scotland recorded a decline of 28 per cent.

“It’s likely that things will get worse rather than better without us doing potentially quite a lot of work to intervene,” he adds.

Habitat destruction, pesticide use, and climate change have all contributed to the stark decline.

Why do insect declines matter?

Flying bugs are critical for biodiversity.

Insects are food for animals such as birds, bats, reptiles, and fish. They also perform vital roles such as pollination of crops and wildflowers and nutrient recycling. Beetles, wasps, and dragonfly families also act as predators for smaller insects helping with pest control.

If they die out, the entire ecosystem - and food production system - would suffer.

“We tend to take [insects] for granted, they’re in the background and we don’t notice them, but they are absolutely crucial to life as we know it,” Hetherington says.

“We’re worried about inflation now, imagine how bad inflation would be then.

“[If we lose] dung beetles, another quarter of a billion pounds on our food bills every year.”

The environmental effects would also be catastrophic.

If we lost pollinators in the UK alone, you’d be putting £2 billion on your food bill.

If insect declines aren’t halted, eight out of ten wildflower species in the UK could disappear.

The majority of songbirds would die out, with just four or five species able to survive without healthy insect-populations.

What can we do to reverse these declines?

The survey makes for sobering reading, but it’s not too late to save flying bugs.

“On the positive side, because [insects] have relatively short life spans, you can turn things around in a fairly short space of time,” Hetherington says.

“If we do the right things, in the right places, we can make a difference.”

Governments have a large role to play too, and can limit habitat loss and reduce mass pesticide usage.

But individuals can play their part too. Letting grass grow long and sowing wildflowers in gardens are crucial to helping increase insect populations.

“If you plant a group of herbs, and you let them flower, you’ve created the equivalent of a motorway service station, where pollinators can drop off, fill themselves up, and be able to make the distance to the next really good piece of habitat,” he says.

He also encouraged people to download the Buglife app and start recording bug-splats.

“The more people taking part in the survey, the better the data will be, and the more we will be able to pinpoint what’s going on at a much smaller level.”