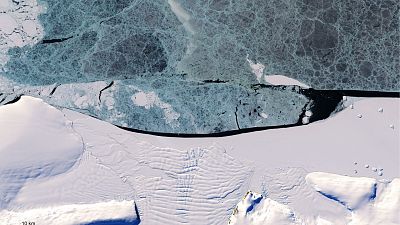 We often hear about polar ice melting due to global warming, but one Antarctic ice shelf has grown in the last 20 years, new research has found.

Scientists say that changing wind and sea ice patterns have led the eastern Antarctic Peninsula Ice Sheet to expand since the start of the 21st century. This followed two decades of ice retreat.

A team of researchers from the universities of Cambridge and Newcastle in the UK and Canterbury University in New Zealand found that floating ice shelves on the eastern Antarctic Peninsula grew between 2000 and 2019.

They used satellite measurements dating back 60 years, as well as ocean and atmospheric records to get a detailed understanding of ice conditions in this 1,400 kilometre-long peninsula. Their results showed that 85 per cent of the ice shelf in this area grew since the early 2000s.

Ice shelves are floating sections of ice that are attached to land-based ice sheets. They help protect the inland ice from eroding and breaking off into the ocean.

During their 2019 expedition to Antarctica, the researchers noted that “parts of the ice shelf coastline were at their most advanced position since satellite records began in the early 1960s,” says expedition chief scientist and study co-author Professor Julian Dowdeswell.

The expansion follows the rapid melting of ice in the second half of the 20th Century, including the collapse of the Larsen A and B ice shelves in 1995 and 2002. This contributed to rising global sea levels and warnings of flooding in coastal areas.

Global sea levels have risen around 21-24 centimetres since 1880, with about a third of that happening in the last 25 years. Rising waters threaten infrastructure, homes and livelihoods on coastlines around the world – eight out of the world’s 10 largest cities are near a coast, according to the UN.

What caused the growth of the ice shelf?

The results, which were published in the Nature Geoscience journal, suggest that sea ice and regional wind patterns had a vital role to play in stabilising the ice shelf.

A change in wind conditions over the Weddell Sea pushed floating sea ice against the ice shelves, binding them together.

Before 2002, winds in the same area blew sea ice away from the coast, wearing down what scientists call a “buttressing effect.” This meant ice shelves were exposed to ocean waves and currents, leading to the formation - or calving - of icebergs that broke away into the sea.

“Regardless of how the sea ice around Antarctica changes in a warming climate, our observations highlight the often-overlooked importance of sea ice variability to the health of the Antarctic Ice Sheet.”

An uncertain future for polar ice

Ice expansion in the Antarctic is unusual for the 21st century, when there has been a clear pattern of melting ice.

Antarctic ice loss nearly quadrupled from 51 billion tonnes per year to 199 billion between 1992 and 2016. But scientists do not know for sure how Antarctic ice will be affected by climate change and influence sea levels in the years to come.

Some models have forecast that overall sea ice in the Southern Ocean will be lost, but others predict sea ice gain.

The authors of this latest research say 2020 could have marked the end of the expansion in Eastern Antarctica. In the last 18 months there has been an increase in the number of icebergs breaking away from the peninsula.

“It’s entirely possible we could be seeing a transition back to atmospheric patterns similar to those observed during the 1990s that encouraged sea ice loss and, ultimately, more ice shelf calving,” says co-author Dr Wolfgang Rack from the University of Canterbury.