A truly enormous iceberg has broken off Antarctica’s Larsen C ice shelf, changing the map of the continent forever.

Depending how you look at it, this lump of floating ice is either the size of Luxembourg, four times the size of London, as big as Delaware, or a quarter the size of Wales. Whichever you prefer, you can agree it’s big: 5,800 square kilometres, and is one of the largest icebergs ever recorded.

Photographed by Europe’s Sentinel-1 satellite from space, the crack along the ice can be clearly seen. It probably broke off sometime between Monday 10th July and Wednesday 12th July.

The iceberg weighs one trillion tonnes, and includes as much water as Lake Erie. However, it won’t have any perceptible effect on sea level rise as it was already ‘floating’ in the ocean even when it was attached to the rest of Antarctica. 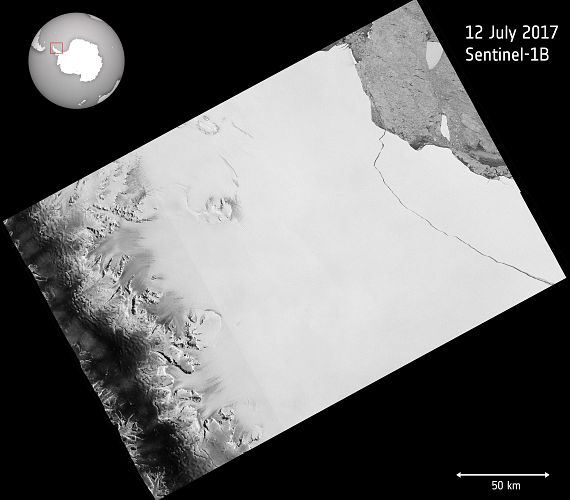 The break during the winter-time comes after many years of slow cracking, as the rift was first spotted in the 1980s. The iceberg is expected to break up, with some parts of the ice staying in the same region for decades while other ‘bergs drift northwards.

The fear now is that the calving of this iceberg could make the remaining ice shelf less stable. The Larsen A ice shelf collapsed in 1995, and the Larsen B ice shelf suddenly collapsed in 2002.

Scientists have been quick to point out that this massive iceberg should not be linked directly to climate change, and does not foreshadow an imminent rise in sea level. Although rare and fascinating, especially when viewed from space or the air, the experts are insisting that this iceberg is most likely part of the natural cycle of ice being shed from Antarctica, although its unusual size could hint at more extreme events in the decades to come.

Ice shelves are formed when glaciers flow into the sea and the climate is cold enough for the ice to sustain itself on the open water, creating a floating shelf of ice hundreds of metres thick.

We are waiting for the #Sentinel1 overpass later today to confirm the break. Stay tuned and #WatchThisSpace for more on #LarsenC. pic.twitter.com/YY8o2Xat9F