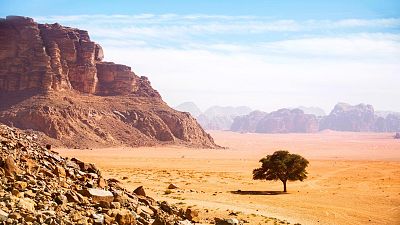 Jordan is one of the world’s most water-scarce nations, with as little as 100 m3 of water available per person every year. To put this into context, the UN defines water scarcity as anything below the threshold of 500 m3 per person - a staggering gap which is only growing wider.

Rising temperatures, reduced rainfall and limited vegetation are behind the shortage. A rapidly increasing population is also pushing the nation’s available water resources to the limit.

Efforts to restore once fertile land have so far been in vain. But in the country’s sun-scorched region of Badia, a group of female environmentalists are pursuing new ways to ward off further damage.

She explains that 90 per cent of the land is arid while just one per cent is forest. This means that a majority of the land has already been degraded.

"We want to restore these areas and encourage land restoration across the country through planting native seeds. These will capture rainfall and help retain groundwater throughout Jordan.”

The desert is being turned into a wilderness

Badia is the largest geographical zone of Jordan, extending from the northeast to the deep south.

The region is home to the Bedouin - a series of nomadic tribes spread throughout the Arabian Peninsula. These livestock breeders have followed ancient traditions for centuries, but settlement, drought and overgrazing are now putting their income at risk.

"In Badia, when rain falls now, most of the water runs off and gets evaporated,” says Mousa.

“It's very important to keep the water where it falls, for the sake of livestock breeding. The use of micro-harvesting techniques, coupled with the use of native seedlings, will allow us to do that.”

WADI is employing local women to plant and mind seedlings in its nurseries. One site can produce as many as 150,000 seedlings every year, providing jobs for up to 1,000 seasonal workers.

These seedlings will eventually be planted in the desert, capturing rainfall and providing a natural solution to Jordan’s water shortage crisis.

"We are the people of the Badia, so we must take care of the vegetation cover,” says Reem al-Zbaidi, the manager of one of WADI’s nurseries.

"We must spread awareness among the people of Badia regarding the importance of vegetation cover. We must fight desertification, because the livestock depend on it.

“The livestock must be preserved for meat and dairy. We are the beneficiaries. If we don't care about these things, desertification will only increase with time."

Is water scarcity a global problem?

Much of Jordan’s land receives as little as 200 millimetres of rainfall every year. Scotland, by contrast, receives over 20 times that.

The NGO hopes the greenery will help the land retain rainwater and preserve its ailing ecosystem.

"The success rate of these plants is 85 per cent, which is considered a very high percentage, and they only need to be watered once, which is also reducing the amount of water needed for the irrigation of the green areas."

Jordan is one of several countries grappling with the effects of land degradation. More than 2.3 billion people currently live in water-stressed countries, according to a recent report by the UN.

By 2030, it anticipates that over 700 million people could be displaced by drought.

Watch the video above to find out more about Jordan’s water scarcity.