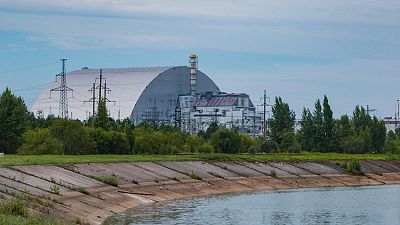 On 2 April 2022, Ukrainian forces regained control of the Chernobyl nuclear power plant after Russian forces had occupied it for over five weeks.

Now footage has emerged showing trenches dug by Russian troops in the exclusion zone, which may help to explain their retreat.

As we all know by now, the Chernobyl nuclear power plant in Ukraine was the site of the world’s worst nuclear disaster in 1986. A 30km area surrounding it, known as the exclusion zone, is still considered too radioactive for people to live in.

In late March it was reported that Russian forces occupying this area were starting to retreat, amid rumours they were suffering from radiation poisoning. At least one soldier is known to have died so far.

According to Yevhen Kramarenko, head of the agency in charge of the Chernobyl exclusion zone, Russian troops had dug trenches in an area known as the ‘Red Forest’ which is the most contaminated part of the exclusion zone.

The area was given this name as all of the pine trees turned red after absorbing radiation from the meltdown.

When the Russian soldiers dug their trenches, they inadvertently removed a natural barrier - the top layers of soil - that had formed over highly contaminated ground containing radioactive waste.

What are the effects of radiation poisoning?

The radiation levels in the red forest are so high that, according to Kramerenko, in just 24 hours of doing nothing a person can be exposed to the annual maximum recommended dose of radiation.

“But if they keep moving and if they disturb the top layer of the soil which is the natural barrier, then the exposure is much higher,” says Kramarenko.

Radiation poisoning can cause a variety of effects depending on the strength and length of exposure. Nausea, vomiting and fever are common and in more extreme cases it can lead to internal bleeding and skin burns. Long term effects have been linked to cancer and cardiovascular disease.

“These people can even be dangerous to other people, they can expose others to radiation,” Kramarenko says, adding that the radioactive soil can be spread around by animals as well.

The retreating soldiers are thought to have headed towards the Belarus border and Ukrainian forces are now clearing up the site hoping to remove mines to prevent any further radioactive disasters.

**Watch the video above to see the Russian trenches. **