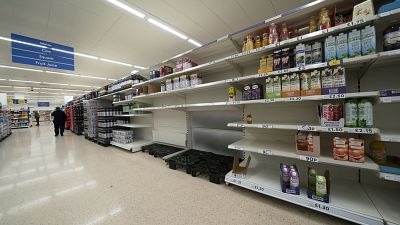 The world could be facing a food crisis with prices soaring and crops at risk due to the war in Ukraine, the UN Food and Agriculture Organisation has said.

Food prices were already high due to unpredictable weather, in part because of climate change, and the COVID-19 pandemic.

Now with the invasion of Ukraine, the world’s food systems could be tipped into disaster. Exports are blocked, people can’t work the land in Ukraine and farmers can’t get the vital supplies they need to continue growing food.

So which foods will see the biggest impact from the war in Ukraine?

Wheat is the key component of these everyday foods.

Almost a third of the world’s wheat is supplied by Russia and Ukraine, known as Europe’s breadbasket. Ports are closed and infrastructure is in chaos, meaning different sources of this vital crop need to be found. With farmers in Ukraine unable to plant their crops, a shortage of wheat could also be on the horizon.

At the moment, finding different suppliers means prices are going up and the cost of wheat has already hit record highs. More than 50 countries depend on the two nations for their wheat and this staple makes up around a fifth of the world’s calories and protein.

Some of the biggest importers of wheat from this region are in North Africa including Nigeria, one of the world’s poorest nations. These countries are bearing the brunt of the crisis while already financially weakened by the pandemic.

Shortages or cost increases for wheat mean an impact on essential food items such as bread, pasta and cereals.

Crisps and other fried foods

Russia and Ukraine account for around 70 to 80 per cent of global exports of sunflower oil. The sunflower itself is Ukraine’s national flower.

The EU imports around 200,000 tonnes of Ukrainian sunflower oil every month, according to trade group Fedoil.

The planting season is from April to May and is likely to be impacted by the conflict. With fewer people to work the land, due to conscription or fleeing the country, and no ability to import vital supplies its unlikely that the situation will improve.

Supermarkets in Spain and Italy have already started to ration the sale of sunflower oil after the invasion of Ukraine led to panic buying. But it isn’t just consumers buying it to use themselves. Sunflower oil is often used to create fried snacks like crisps which could see companies raise their prices in the face of a shortage.

Corn or maize is another staple food item commonly grown in Ukraine and Russia. As the fourth and fifth largest corn exporters, together they make up around a fifth of the total exports of this crop.

This year Ukraine was expected to grow its largest ever crop of corn, exporting almost 80 per cent of what it produces. With ports closed during what is peak export season for this foodstuff, it is looking unlikely that the corn will make it out of the country.

Corn has many uses too and beyond a shortage of the actual food stuff itself, it could have an impact on meat production. It is used as animal feed in many parts of the world and price hikes could mean the cost of meat increases.

What can you do to help prevent shortages?

The threat of stocks running low tempts many people to buy more than they need in case of a shortage. This can make the problem worse, as was seen with panic buying of toilet paper at the start of the pandemic.

It isn’t just individual consumers though that think of their own supplies before others. The threat of a food shortage can lead countries to turn inward, making sure their own populations are fed.

G7 ministers have already issued a statement saying they will “do what is necessary to prevent and respond to a food crisis.

“We call on all countries to keep their food and agricultural markets open and to guard against any unjustified measures on their exports,” It reads, adding that the G7 will “not tolerate artificially inflated prices that could diminish the availability of food and agricultural products.”

With a potential shortage looming and the cost of living on the rise, reducing your food waste has never been more important. A fifth of all the food produced in Europe is thought to be wasted with 88 million tonnes lost every year.

Higher prices mean an increase in food insecurity and those already struggling are likely to see the biggest impact. By aiming to cut down on what we throw away by reusing food scraps or finding ways to save what might otherwise be wasted in rich nations, the pressure on our food systems could be eased.

You can find more advice on reducing food waste here.