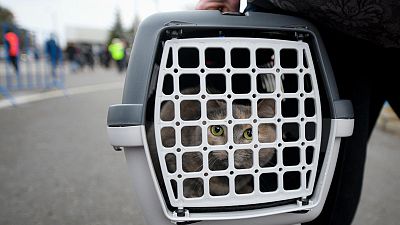 More than one million people have fled Ukraine so far according to UN estimates, with a further three million expected to leave because of the Russian invasion.

While countries across Europe have changed their immigration rules, making it easier for people to seek asylum and find safety, many have asked: what about pets?

When we talk about pets in the same breath as the humanitarian tragedy unfolding in Ukraine, it can sometimes feel a little flippant. Surely our focus should be on the human victims, not someone’s cat?

But to the very real people at the centre of this tragedy, their pets are not something to be flippantly forgotten about. For the people fleeing Ukraine, being forced to leave behind a core family member only adds to the trauma.

The mental health benefits of being around animals and having pets are well documented. For example, therapy sessions using dogs and horses have been found to significantly alleviate symptoms of PTSD in former soldiers.

"Having pets with us provides an emotional support and helps reduce the stress and fear of the unknown future, having them with us make us feel WHOLE again," says the team at Animals Syria - CatConnect, a charity that rescues animals in Syria and either reunites them with their owners overseas, or finds new homes.

"We are watching the news of the Russian-Ukrainian War with big sadness," they tell Euronews Green, "it hits emotional a lot because we went through that, and we know what it means to have to leave everything behind and run to save your life.

"In these conditions, family and beloved ones count the most - and there is no way to leave them under the danger of fending for themselves. By family, we mean not only human beings - but also out pets."

The team at Animals Syria - Cat Connect shared with us a quote from Antoine de Saint-Exupéry's book Le Petit Prince, which they say best describes this situation:

Organisations like Humane Society International and PETA are now calling on countries to relax veterinary paperwork for any pets travelling with refugees.

Where can people in Ukraine take pets when leaving the country?

Romania, Czech Republic, Lithuania, Slovenia, Hungary and Poland have all relaxed their restrictions on pets, meaning refugees from Ukraine can take animals with them. In Poland there is even funding available for accommodation and vaccination of pets, making things even easier for families travelling with animals.

In these countries, there are now people at the borders working to provide assistance for those with pets.

Sava’s Safe Haven, a family-run animal shelter based in Galti, Romania - near the eastern-most border with Moldova and Ukraine - is among the organisations providing practical help to Ukrainian refugees with pets.

Men aged 18-30 are not allowed to leave Ukraine at present, as martial law has been enacted. Sava’s team is also providing foster homes for the pets of some single men, who have to remain in the country - but want their pets to be safe.

Sava’s team is providing help at three of the customs points into eastern Romania: Giugiulesti and Oancea on the Moldova-Romania border, and Isacea on the Ukrainian border - which is the most used.

Their work involves donating goods like food and blankets for pets, as well as longer-term assistance with acquiring pet passports, sorting microchips and organising vaccinations. Although animals don’t need these things to get into Romania, all pets will need to be registered and properly vaccinated after they arrive.

Men aged 18-30 are not allowed to leave Ukraine at present, as martial law has been enacted. Sava’s team is also providing foster homes for the pets of some single men, who have to remain in the country - but want their pets to be safe.

Of course, among all this, Sava’s Safe Haven is also providing as much support as possible to humans too - organising transport from major cities, finding shelter for families, and looking for ways to send bulk food supplies to those left in Odessa.

Now, Sava’s Safe Haven is raising funds to continue this (along with their normal work, protecting street dogs), and the team is looking to build an emergency unit to increase the centre’s capacity.

What do organisations want other governments to do?

PETA Germany is positioned along the Polish and Romanian borders at present, helping people with pets safely cross out of Ukraine.

However, PETA highlights that it’s virtually impossible for refugees to easily take their pets into the EU or UK - except for the countries that have changed their policies.

“The current regulations for bringing companion animals into the EU and UK are impossible for refugees to follow in a state of war,” says PETA.

“Animals such as dogs and cats must be vaccinated and microchipped and need an antibody titer for rabies confirmed through a serological test to enter the EU—but many of those who have been forced to flee don’t meet these requirements.

“Terrified animals must not be left behind to suffer agonising deaths.”

The European Commission has advised all EU Member States to relax veterinary paperwork requirements to help make things easier for refugees. This hasn’t been unilaterally put into action across all Member States, however many EU countries have adopted this practice.

“We are deeply concerned for the people and animals impacted by Russia’s invasion of Ukraine, and so we welcome the European Commission’s recognition that people fleeing the conflict care deeply about their companion animals as beloved members of their family and will want to keep them safe,” says Ruud Tombrock, executive director for Humane Society International.

“Those seeking refuge will be greatly relieved to know that they can make evacuation plans to EU countries with their pets without unnecessary delay. This is a precedent-setting compassionate stance from the EU that we very much hope will be replicated around the world during similar conflict situations.

“People should not have to jeopardise their own safety in efforts to prevent their animals from being left behind to fend for themselves.”

See the latest countries that have relaxed their veterinary requirements for Ukrainian refugees here.