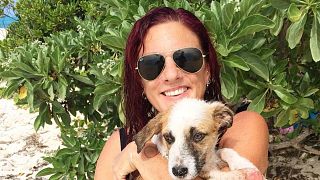 A British woman who died in the Tonga tsunami was a “passionate” animal lover who sheltered stray dogs on the islands.

Angela Glover, 50, is the first confirmed casualty from the disaster, which was triggered when an underwater volcano erupted near the Pacific island nation on Saturday.

Two locals, a 65-year old woman and 49-year-old man, also lost their lives, the Tongan government confirmed in a statement today, calling the tsunami an “unprecedented disaster”. The environmental impact is still being assessed - with NGOs warning of contaminated drinking water and sea water ruining crops, as well as countless homes destroyed.

“She was just the most beautiful, wonderful, caring, loving human being,” Serena Schellenberg says of her friend Angela, who she met at the start of their advertising careers in London.

Speaking with Euronews Green, Ms Schellenberg says, “I loved the fact that having had a really high-powered career, she was at the top of her game [working for leading agencies such as AMV BBDO, Mother and JWT where the pair met in their 20s] yet she pushed all that behind her to find a more fulfilling way of life.”

A lifelong love of wildlife brought Angela to Tonga in 2015 with her husband James, where she fulfilled her dream of swimming with whales in the south Pacific, Angela’s brother Nick Eleini told The Guardian. She founded the Tonga Animal Welfare Society (TAWS) in 2020 to care for animals on the main island of Tongatapu.

Tragically, Angela is reported to have lost her life trying to rescue her dogs on a beach on the west coast of the island. Her husband escaped the waves by clinging onto a tree, Mr Eleini said.

Friends back home in the UK were kept updated on Angela’s new life by regular Facebook posts, sharing the joys and challenges of looking after Tonga’s lost and injured animals.

“She would post prolifically,” says Ms Schellenberg, “constantly sharing beautiful photos of nature and marveling at the world she lived in. She really had a paradise, a magical place, but she was just focussed on saving the dogs.”

TAWS was founded with five other residents to promote animal welfare - especially important as there is no permanent vet on Tongatapu.

"The uglier the dog, the more she loved it,” Mr Eleini said of his sister’s unlimited love for the species. “She just loved them all, she was totally dedicated to it."

It was a dog nicknamed “Little Big Head”, because of his enlarged head, that inspired Angela to set up TAWS. She was penning a children’s story about the “special” dog’s life which she hoped could be used to educate local children on the plight of street dogs in Tonga.

“She was always trying to connect with children in the community about loving, nurturing, respecting animals and the environment,” says Ms Schellenberg.

"We want to promote better relationships with animals,” Angela told Radio New Zealand Pacific in June 2020. “There is a huge positive change in peoples' approach to animals, but I think Tongans don't know where to go when they have a problem with their animals, so we are here to support those people in our community.”

“She is one of those beacons in life and I truly know her legacy will live on,” Ms Schellenberg wrote in a Facebook post, describing her shock and sadness at her friend’s death.

In its update, the Tongan government said work is ongoing to restore full communications to the island chain after its single underwater cable was severed in the eruption.

Evacuations from some of the worst hit islands are continuing, slowed by the volcanic ash which has blanketed much of the area and made it difficult for aid-carrying planes to land at the airport.

When aid can arrive, the UN has pledged to try and maintain Tonga’s COVID-free status.