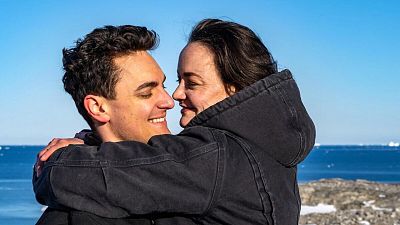 There’s nothing like a love story to melt an icy heart - and that’s more true than ever if you live in Antarctica.

That was the case for polar explorers Peter Boyle and Dr Natasha Behrendorff, members of the Australian Antarctic Division (AAD) who kindled their relationship during a 500-day stint on the frozen continent.

“I was pretty enamoured with her from the get-go, I thought she was pretty cute,” says Boyle, an electrician who saw sparks fly between the pair during their pre-departure training.

“There’s a bus that takes you to the Australian Antarctic Division headquarters from your hotel,” says Dr Behrendorff.

“Pete stepped on and I found out he was a sparky. He just kept on smiling until we had a conversation.”

They soon became inseparable, spending time sightseeing in Tasmania before their separate postings at Casey and Davis research stations.

“We were surprised at the connection we made together and at how much we missed each other,” says Boyle.

“We continued our relationship long-distance and managed to bridge the 1400-kilometre gap with the modern marvels of satellite internet connection.”

While their separation was difficult to endure, the couple managed to keep up the heat in their relationship through regular phone calls and video chats.

“Occasionally we dressed up for each other and had virtual dinner dates,” smiles Boyle.

And despite spending nearly a year and a half apart, the couple moved in together shortly after returning home to Australia.

A proposal to remember

It wasn’t long before Antarctica called again - this time for a shorter stint during the summer months.

Knowing they would be reunited in Antarctica, Boyle decided to propose to his partner in the place that had first brought them together.

“I decided to scout some locations, so I went down to the wharf and came up to the station limits,” says Boyle.

“I looked over and saw the penguin colony and these gorgeous, snowy slopes and thought: ‘this is it’.”

Word of his planned proposal spread quickly around the station. When the time came to pop the question, Dr Behrendorff had her answer ready - an unequivocal yes.

“He’s a bit of an open book,” says the medical practitioner.

“I did have some inklings. He was asking me what size ring I was. I also knew he was not the kind of man to let such a romantic opportunity pass him by.”

Dr Behrendorff and Boyle have several months work ahead of them in Antarctica, before the real challenge begins - organising the big day itself.

Watch the video above to find out more about the happy couple.