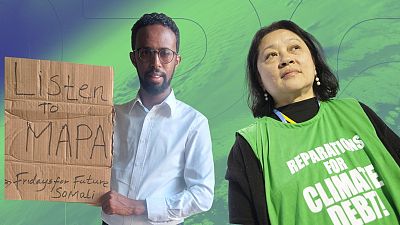 The Scottish city is buzzing already with more than 30,000 delegates descending on the conference.

Despite the breadth of representation here - with people from different countries, organisations, and charities - there are some notable exceptions. A combination of the COVID-19 pandemic, the cost of getting to (and staying in) Glasgow, and other logistical issues mean key voices are at risk of being left out of the conversations here at COP26.

COP President Alok Sharma previously said that “this should be the most inclusive COP ever,” but at the moment that statement doesn’t seem to be holding up.

Contributing the least, affected the most - but missing in Glasgow

From MAPA (Most Affected People and Areas) regions, there is a distinct lack of advocacy. According to Island Innovation, a third of Pacific islands have announced they are unable to send senior delegations for the first time in COP history.

These nations, Small Island Developing States (SIDS), are the least responsible for climate change - but are some of the most impacted. And their voices are missing here in Glasgow.

Only four Pacific island nations are sending their leaders, Fiji, Papua New Guinea, Tuvalu and Palau. The rest either have limited or no representation, largely due to COVID-19 restrictions.

The US, on the other hand, has sent a delegation of around 1,000 people.

But these low-lying Pacific islands are being seriously threatened by the climate crisis - far more than anywhere in the Global North. From rising temperatures to shifting weather patterns, there is a multitude of risks. Most pressingly, however, are rising sea levels which could leave entire countries submerged.

SIDS were essential in adopting the 1.5C threshold for global warming set at COP21 in Paris back in 2015. Their voices were vital in emphasising the very real, very urgent need to mitigate temperature rises as much as possible.

We’re already at 1.1C, but this time around those voices aren’t here.

“Our sovereignty and very survival are at stake,” says Fijian Prime Minister Frank Bainimarama. This could be the “final opportunity” to keep to the 1.5C limit.

This sentiment is echoed by young people who have also been shut out of participation.

“COP26 is the platform where a global decision on climate change is taken,” says climate activist and ActionAid youth ambassador Mini Aktar from Jamalpur, Bangladesh.

“But we are the ones who face the direct impacts of climate change. If we are not part of COP26, it is not possible to make fair and just decisions.”

“World leaders are aware enough on how to tackle the climate crises,” says Alghrair.

“Unfortunately, when it comes to implementation we don't often see a strong commitment and it turns out to be less of a priority to other issues they must deal with.

“We want a serious full commitment to achieve the Paris agreement.”

‘A more inequitable and undemocratic process’

There is a feeling among those who are shut out of Glasgow that proceedings will be less successful, less radical, and less just without MAPA voices.

“I feel I’ve lost mine and my community’s voice,” says Aqli Farah, an environmentalist and climate educator in Somalia. “We are the most affected by climate change because our community depends on natural resources.”

He believes that he is also missing out on knowledge sharing that can only be gained through a physical presence at COP26.

“Exchanging information is so important, to get extra knowledge and even experience from other nations on tackling climate change,” Farah adds.

Lidy Nacpil, an activist working on economic, environmental, social and gender justice issues, coordinates the Asian People’s Movement on Debt and Development. She has sent groups to COPs since the 13th summit in Bali back.

“This is the first COP we are not attending since 2007,” Nacpil says, “it’s very frustrating for us not to be able to attend COP26 in person.”

Based in Manila, Philippines, Nacpil is one of many who will have to watch proceedings from thousands of kilometres away. There’s a palpable exasperation among the people we’ve spoken to, especially from the most affected regions, as the future of their communities and countries is being decided without their voices in the room.

“While we have no illusions that climate justice solutions will be forged primarily through negotiations, the COPs are very important arenas to engage, challenge and pressure governments,” explains Nacpil.

“COPs are dominated by wealthy governments and corporate interests, thus it’s always an intense effort to raise the voices, perspectives and calls of people and communities, especially those from the Global South.

“With much reduced Southern presence at COP26, it will be a more inequitable and undemocratic process than ever,” she adds.

Despite these setbacks, there is still a push to make the most of the online opportunities to engage with COP26.

“Our partners and allies who will be at Glasgow are certainly doing what they can on the ground to ensure our messages are conveyed including using digital platforms,” Nacpil says.

“We are also campaigning from our countries, mobilizing and reaching out via media.”

But it was only recently made clear that online participation is still limited to those who are officially accredited - for which there is a cap on numbers.

“We gave away our accreditation slots weeks ago when we realised we would not be able to make it,” Nacpil adds, “so even online access is extremely limited.”

There is surprise among the people we spoke to that a blended online and in-person model hasn’t been implemented.

“Considering the gravity of the discussions to be held during the conference, it’s interesting that a hybrid event model wasn’t adopted to promote increased turnout and engagement,” says Muhammad Malik, CEO and founder of NeuerEnergy who has also been unable to attend.

“Over the last year event organisers have had to adapt and embrace the virtual world, using the technology available to maximise attendance and visibility.”

Malik feels as though a blend of online and offline is vital in maintaining momentum at an event as important as COP26.

“That being said, it's crucial that we strike a balance. The virtual world doesn’t always allow for chance encounters with possible collaborators,” he continues.

“A brief chat over a coffee can inspire an important stakeholder to accelerate their organisation’s move to zero emissions, so combining physical and virtual strategies moving forwards can only be a good thing.”

But Farah highlights that even a hybrid approach would be of limited use to remote communities on the frontlines of the climate crisis.

“It’s difficult to access the conference in remote areas due to poor internet and lack of social media,” he explains.

In Glasgow, but still shut out of proceedings

For those lucky enough to be in Glasgow, however, there are still obstacles.

Alaina Wood, a sustainability scientist and environmental communicator - as well as one of the co-founders of EcoTok - is here at COP26. But Wood only has access to the public Green Zone.

She can’t enter the Blue Zone, where the bulk of the networking and action is taking place, due to accreditation limitations. Media accreditation closed more than 20 days earlier than promised leaving many shut out from proceedings.

“As a scientist from Tennessee, I represent rural areas and the climate challenges they face,” says Wood.

“Rural representatives are more often than not left out of the Blue Zone, and because of that, quite a bit of proposed climate policy is not feasible for rural areas. But I am also a science communicator, and not being able to get a blue zone pass means my science communication won’t be as accurate as it could be.

“I am still very fortunate to be able to attend COP26 in the Green Zone, but being in the Blue Zone would be a lot better for me and the communities I represent.”