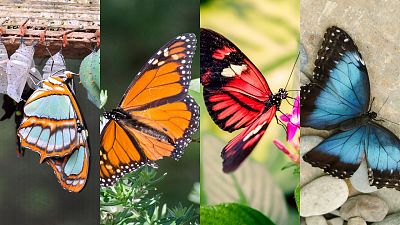 Colombia is home to around 20 per cent of the world's butterfly species, the highest number in the world, according to a new study released by the Natural History Museum in London.

An international group of scientists have identified 3,642 species and 2,085 subspecies in Colombia - a country with some of the richest biodiversity in the world.

"More than 200 species of butterflies in this census live only in Colombia and in no other country in the world," says Blanca Huertas, butterfly specialist at the Museum of Natural History in London.

"Also, if we lose them, there is no rescue population and it will be forever," she adds, calling for the protection of their natural habitat. Huertas is urging for "the protection of butterflies in Colombia to help protect forests and other less charismatic species."

Scientists participated in this project "for the greater part of their careers", during study trips to Colombia, as well as through analysing more than 350,000 photographs and bibliographic compilations which have been around since the 18th century, the museum said in a statement.

The 300 page-long list makes clear that Colombia is now officially recognised as having the most important quantity of butterfly species in the world, “a position it already occupies for birds and orchids," says the museum.

According to the study, two other South American countries, Peru and Ecuador, are approaching a similar level of lepidopteran biodiversity. But for the moment no exhaustive scientific publication in these countries allows us to know for sure.

Researchers also stress that the census of butterflies in Colombia "still suffers from a lack of information" and will have to be supplemented by new research and discoveries.

"Colombia is a country with a great diversity of natural habitats, a complex and heterogeneous geography (...) These factors, added to the delicate security situation over the past century in certain regions, have limited until today advances in field exploration," says the museum.

Many regions of the country have been affected for decades by the armed conflict against the rebellion of the Revolutionary Armed Forces of Colombia (FARC), which signed a peace accord in 2016.