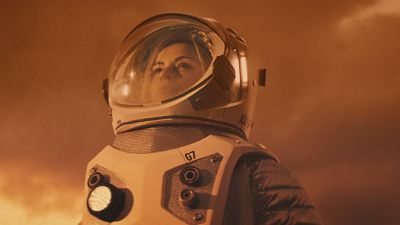 A satirical advert encouraging people to move to Mars has been created by the Fridays for Future campaign (FFF).

If you’re not rich enough to escape to Mars, you’d better start tackling climate change on Earth now. That’s the message behind this new video from the environmental movement founded by Greta Thunberg.

As NASA's Perseverance rover prepares to arrive on Mars this Friday, 18 February, FFF presents ‘1%’. It is an ironic travel ad for Mars which highlights the fact that 99 per cent of the world’s population won’t have the luxury of leaving Earth and the effects of climate change behind.

NASA’s Perseverance rover will join the UAE's Hope orbiter and China’s Tianwen-1 orbiter and rover duo on Friday. Although these missions are unmanned it’s thought that people could soon step foot on the red planet. Elon Musk is “highly confident” that SpaceX will land humans on Mars by 2026.

Developed with Los Angeles ad agency FRED & FARID, ‘1%’ excites viewers about the prospect of escaping to Mars It promises a place where there is “no war, no criminality, no pandemics, and no pollution” before hitting viewers with the truth and a call-to-action, which comes with the line: “And for the 99 per cent of humans who will stay on Earth, we’d better fix climate change.”

“We aimed to create a film in a retro-futuristic and propaganda genre that would be both provocative and impactful,” says FRED & FARID Los Angeles.

“We wanted to highlight pure nonsense,” says a FFF spokesperson. “Government-funded space programs and the world’s ultra-wealthy 1 per cent are laser focused on Mars (NASA’s Perseverance Rover alone cost $2.7 billion for development, launch, operations and analysis) – and yet, most humans will never get a chance to visit or live on Mars.

“This is not due to a lack of resources - but the fact that our global systems don’t care about us - and refuse to take equitable action.”

What links a Bosnian village and NASA's historic bid to land on Mars?