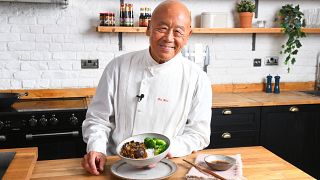 When Ken Hom first came to the UK in 1971, he went to London’s Chinatown.

“One of the biggest sellers was fish and chips,” he laughs.

Hom was born to South Chinese parents in Arizona and spent his childhood learning Chinese cooking from his mother and at his uncle’s restaurant. But in London's Chinatown, his cuisine wasn't to be seen.

“I knew it wasn’t a Chinese invention, so I wanted to know why the restaurants were selling it. It was to survive,” Hom explains. “Brits didn’t know a lot about Chinese food.”

Things have changed massively since then. In a recent survey 82 per cent of Brits eat an Asian dish at least once a week. “Asian food has become part of the DNA of this country,” Hom says.

When asked why, Hom brings up more Britons being able to travel, an openness to new things, and the growth of available Asian food products in local supermarkets.

But Hom is too modest to bring up one big reason why Chinese and Asian food is so much more popular today in the UK: himself.

In the 70s, Hom made a name for himself teaching Chinese culinary skills in California. Then, in 1984, he made his first cooking show with the BBC in the UK, ‘Ken Hom’s Chinese Cookery’.

It was the beginning of a successful career in front of people’s screens, showing the British public how to get acquainted with Chinese and Asian cuisine.

Pretty much every Brit above the age of 30 with an interest in cooking will know the name Ken Hom. And there’s a fair chance the first time they tried cooking a Chinese dish will be because of him.

Hom has also written numerous cookbooks and was even awarded as a Commander of the Order of the British Empire CBE by Queen Elizabeth II in her final Christmas honours list.

Now in his 70s, Hom is far from done. He’s still on the brigade, espousing the value of traditional Chinese cooking methods.

“There’s so much Chinese wisdom around food,” Hom explains. “What’s cool about it is that with the upcoming cost-of-living crisis, people will have to watch their budgets. We’re in for some tough times. But that doesn’t mean you have to neglect your food.”

A cuisine for everyone

Talking with Hom is a pleasure as he never tries to withhold his fizzing enthusiasm for food. Almost every thought comes alongside a suggestion for a dish to try, or combinations of flavours to consider.

When thinking about cost-saving, he immediately jumps to a braised cauliflower with oyster sauce dish. “Now might not sound sexy, but guess what, it is delicious,” he says.

While frugality is a primary concern, Hom also advocates for how Chinese cooking styles are much healthier than usually given credit for.

“The British diet before was too meat oriented, just like Americans. You actually don’t need that much meat,” he says.

“In this country, you use veggies to accompany meat as a sideshow. In Chinese cooking, veggies take a prominent role.”

The role of the takeaway in driving the popularity of Chinese food is not lost on Hom, but he’s resistant to people understanding Chinese cooking from that perspective.

“Don’t take the usual sweet and sour pork. Those kinds of dishes tend to be unhealthy and a lot of people in this country choose the fried things. Maybe take one fried dish, but not four or five. Everything is about moderation and balance,” he says.

Either try cooking the food yourself, or when you do go to a Chinese restaurant, “just be bold,” he says. “Then you will see what authentic Chinese food is like.”

When Hom did his first series for the BBC, he had to constantly suggest alternative ingredients due to the scarcity of Chinese produce in the UK. But by the 90s, he didn’t have to make the same allowances.

“It was because of public demand. People started cooking with woks, they were using my cookery books and they could go to the supermarket and buy these sauces. It has become part of the DNA of food culture now here,” he says.

“The English palette is so open to things,” he says. Hom lives in Paris and says while the French are interested in Chinese cooking, it’s not at the scale of the UK yet. “You’ve latched onto it and you want to make it British.”

One of the key things helping that process along is the country’s obsession with spice. Every time Hom does an appearance, he’s shocked at how willing Brits are to get a bit spicy. It suits Hom’s tastes, a man who brings chilli oil with him wherever he goes. “I even put it on my scrambled eggs.”

It’s so important still for Hom that people learn about Chinese culture, and food is the way to do so.

“Food is one of the best ways to enter into another world. When I visit other countries, the first thing I go for isn’t the monuments or famous places but the food. The food tells me about what I’m getting here,” he says.

“When you cook Chinese food, and you taste that wok hei (the term for the smoky flavour from wok cooking), then you’ll get it,” Hom says.

Fake food creations go on display in Japan... and they look delicious

Your taste preferences could be down to your genes, new study reveals