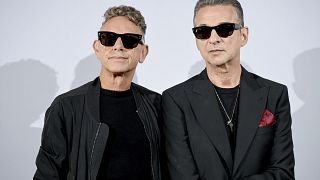 The album, to be released next spring, will be accompanied by an extensive worldwide tour, including live shows in Europe and North America.

Lead singer Dave Gahan said he and fellow band mainstay Martin Gore started talking in January about working together on the project.

Gore had been writing "for a while, through the pandemic," and came up with the title - Latin for "Remember that you must die."

The announcement of the album comes months after the death of the band's founding member and keyboardist, Andy "Fletch" Fletcher.

He was about to join the team in Santa Barbara, California, when he died in May and didn't get to hear any of the material, Gahan said.

"I'm sure that his absence in the studio in some way changes what we did, and that will happen when we perform on stage as well," he added.

"I miss him, and I missed him being in the studio. I missed the things that he would say and do - some of them, some not so much," Gahan joked.

Next year's tour will take the band to major European capitals such as the Stade de France in Paris, Berlin's Olympic Stadium and London's Twickenham Stadium.