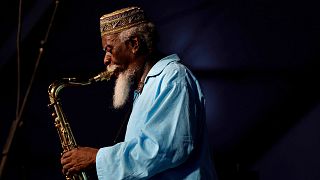 Legendary jazz saxophonist Pharoah Sanders, who pushed the boundaries of his instrument and used music as a method of spiritualism, has died aged 81.

I am a little ashamed to admit it but I only discovered the work of Sanders a month ago.

It was only when I listened to his 2021 collaboration with British artist Floating Points (aka Sam Shepherd) and the London Symphony Orchestra on the LP ‘Promises’, that I first acknowledged his saxophone playing.

Described by Rolling Stones as “both startlingly minimal and arrestingly gorgeous”, the Mercury Prize-nominated nine-movement album is a spellbinding fusion of classical, electronic and jazz music.

It was unlike anything I had heard before, but what stood out to me most was the enchanting yet haunting tone of Sanders’ playing.

Little did I know at the time of listening that it would be the last album he would ever record.

Let’s take a closer look at his life and the legacy he left on music.

Born in Little Rock, Arkansas, in 1940, Sanders began his early life as a musician by playing drums and then the clarinet in church.

In high school he was introduced to jazz by the director of his school band and started renting out the school’s saxophone.

After high school he moved to New York to join the city's avant-garde jazz scene, also known as “free jazz”.

Arriving in 1962, he could hardly afford the New York life.

“I was trying to survive some kind of way," he told the The New Yorker magazine in 2020. "I used to work a few jobs here and there, earn five dollars, buy some food, buy some pizza. I had no money at all.”

In 1965, his music career took off when his playing caught the ear of the great John Coltrane, who invited Sanders to play in his band.

“I couldn’t figure out why he wanted me to play with him, because I didn’t feel like, at the time, that I was ready to play with John Coltrane,” Sanders said. “He always told me, ‘Play.’ That’s what I did.”

He played on more than a dozen of Coltrane's albums, including Ascension and Meditations, and frequently performed live with him at shows.

When Coltrane died of liver failure in 1967, Sanders continued playing for a time with his wife, Alice Coltrane, and he started leading his own bands.

Sanders went on to have prolific career, releasing more than 30 albums, including 'Thembi', 'Elevation' and the renowned 'Karma', which came out in 1969 under Impulse! Records.

The album opens with the 32-minute track “The Creator Has a Master Plan”, where Sanders' soaring, transcendent and euphoric playing made the track a defining recording of the "spiritual jazz" movement.

As well as playing a key role in the boundary breaking spiritual jazz movement, he also helped popularise various saxophone playing techniques, such as overblowing and the use of multiphonics (the technique of playing two or more pitches simultaneously).

Aside from John and Alice Coltrane, Sanders collaborated with many other influential jazz artists, including Ornette Coleman, Sun Ra, and Kenny Garrett.

As previously mentioned his most recent album, 'Promises' in collaboration with Floating Points and the London Symphony Orchestra, came out in 2021.

The release reminded the world of Sanders' legendary status in the world of music and helped introduce the artist to a younger generation of music listeners (myself included).

On the day of Sanders' death, Sam Shepherd (Floating Points) tweeted out, "My beautiful friend passed away this morning. I am so lucky to have known this man, and we are all blessed to have his art stay with us forever. Thank you Pharoah."