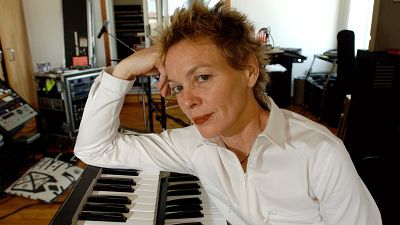 A lifetime achievement award for some can signal the twilight or the end of a glittering career. But Laurie Anderson has big plans for a whole new beginning.

The 75-year-old legendary performance artist and musician plans to transfer her life into an Artificial Intelligence.

“I am writing an opera based on everything I’ve ever said, written or published. And that’s being put into a huge super-computer in Australia," she told Euronews Culture.

Euronews Culture caught up with her at Ars Electronica 2022 in Linz, Austria as she rounded off the show with two spectacular performances.

The festival, which explores technology, society and media art, returned after a two-year hiatus due to the pandemic. It has been the most important event of its kind for more than 40 years now.

This year's theme was "Welcome to Planet B" - prompting the nearly 1000 artists who took part to explore the issues of climate change and discuss how we as a society can respond to the challenges it poses.

But the highlight of Ars Electronica 2022 was the work showcased by Anderson, who was honoured with a special Visionary Pioneer of Media Art lifetime award, for her artistic technological and social achievements.

Who is Laurie Anderson?

We all know her vocoder-led hit “O Superman” that made her accidentally famous (she never planned to release it to a worldwide audience) - but Anderson is more than just a one-hit wonder of yesteryear.

She is a musician, composer, author and media artist whose wide-ranging work revolves around the relationship between people and technology.

Widely regarded as one of the forefront pioneers of electronic music, Anderson has developed and built her own personal instruments throughout her life, such as her legendary tape-bow violin and the 'talking stick'.

She pushed the limits in terms of technology, and at the same time always used her art to transmit her message: a call for tolerance and peace, for the place of women in society, a critical but open-minded view of her home country, the USA.

The New-York based artist, who was married to the late singer-songwriter Lou Reed, has also famously dedicated entire concerts exclusively for dogs.

At both the Sydney Opera House and New York's Times Square, she has performed sets composed and played at a frequency suitable for our four-legged friends.

"Her creations consistently reawaken our sense of wonder. She is, without question, a most deserving recipient of the 2022 lifetime achievement award from Ars Electronica as a Visionary Pioneer of Media Art," says composer and poet Charles Amirkhanian.

As well as being honoured with the Visionary Pioneers award, Anderson performed several works at the festival. These included one of her latest pieces, titled 'Songs for Amelia Earhart' - an orchestral composition in honour of the first female aviator to fly across the Atlantic Ocean.

Like Anderson, Earhart was a trailblazer in her respective field and was inducted into the National Aviation Hall of Fame in 1968.

Anderson who took on the role of narrator and violinist, was accompanied by Dennis Russell Davies, Rubin Kodheli and the Brno Philharmonic Orchestra.

As well as her music, Anderson enthralled the crowd with a virtual reality experience titled 'To the Moon', which, as its name suggests, invites viewers to walk the surface of the moon.

While it's both exciting and enjoyable working in a creative industry, it can also be challenging to stay enthusiastic and inspired all the time.

We thought we'd ask Anderson for some pearls of wisdom on what to do if you ever find yourself stuck in a creative rut.

Her first piece of advice is to throw away the rule book.

“Do your worst work. Try to do your very worst work. Think 'What would be the worst thing I could do?'. And what will happen is, probably, at the very least, you’ll find out what your rules are and what you think you can’t break," she tells Euronews Culture.

"You may find that your worst work is your freest and your best - because you don’t care what anybody thinks. You’re just trying to make something. I think you’ll be able to get a lot of answers that way."

Anderson continued by emphasising the importance of not letting the judgement of others affect how you see yourself or your work.

“You might overestimate how much people care about what you do. Just knock yourself out, call yourself an artist. It’s not like anyone's going to be upset about that. No one really cares that much."

Check out the video above to see what went down at Ars Electronica 2022.