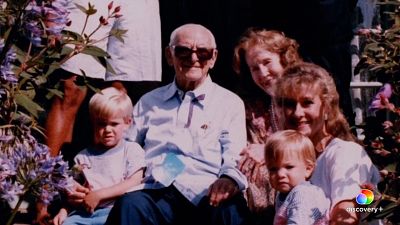 The trailer for an upcoming documentary which chronicles the abuse allegations against actor Armie Hammer has dropped this week. Euronews Culture looks at what happened to Hollywood’s once rising star.

Between 2010 and 2017, the actor starred in several big blockbuster productions like The Lone Ranger and The Man from U.N.C.L.E., as well as critically acclaimed films like The Social Network and Call Me By Your Name. His career seemed to be on the up-and-up.

That trajectory has since halted quite spectacularly.

Following a string of allegations and an embarrassing posts on his alleged secret Instagram account, Hammer was dropped by his agency WME and he withdrew from a string of roles, including rom-com Shotgun Wedding, in which he would have played opposite Jennifer Lopez.

Now, a new three-part documentary titled House of Hammer is heading to Discovery+ on September 2. It will explore the wealthy family that Hammer is a scion of and the patterns between their scandal-ridden past and the actor’s alleged behaviour.

The official synopsis for the documentary series is: "Debauchery. Deceit. Abuse. Addiction. Corruption. Over the course of five generations, the men in the Hammer family have more secrets and scandals than any vault can contain. Armie Hammer’s alleged crimes are only the tip of the iceberg.”

The documentary will feature archive footage and interviews, and is made with the cooperation of Armie Hammer’s aunt, Casey, who penned a book called 'Surviving My Birthright' in which she details allegations of abuse within the family.

She also claims she is unable to watch hit TV show Successiondue to the similarities between the show and her family life.

And as far as dysfunctional dynasties, that’s saying something.

“2021 is going to kneel down before me and kiss my feet because this year I’m the boss of my own year,” tweeted out Hammer on New Year’s Day 2021.

“2020 was a cheap shot no one was expecting. Now I know what we are up against and it’s time to go to war.”

2020 had not exactly been anyone’s year.

Amidst a lockdown in a Cayman Island villa with his father, step-mother, wife and two children, Hammer claimed to have been “losing his mind” and took a flight back to the US.

Abandoning his family in the middle of an unprecedented pandemic was apparently a step too far for his wife, Elizabeth Chambers, who after previous revelations of infidelity in the past, filed for divorce that July.

By January, Hammer appeared to be back on track, but his problems were about to get worse.

Soon after the start of 2021, an Instagram account named @houseofeffie began to post screenshots of DMs purporting to be from Hammer to several women between 2016 and 2020, an overlap with his marriage to Chambers.

The messages were graphic in nature.

“I am 100% a cannibal…. Fuck. That’s scary to admit. I’ve never admitted that before. I’ve cut the heart out of a living animal before and eaten it while still warm,” read one.

“If I fucked you into a vegetative state id keep you, feed you, watch you, and keep fucking you...Till you are so sore and broken…. I can’t stop thinking of [fucking] your actual brain,” read another.

Following the revelations, which Hammer himself described as “Bullshit”, two women who had dated the actor after his separation from Chambers came forward with damning descriptions of Hammer’s behaviour as a boyfriend.

Courtney Vucekovich said in an interview that Hammer had "love bombed" her and was extremely manipulative, even persuaded her to engage in a bondage scenario she felt uncomfortable with.

Likewise, Paige Lorenze described some of Hammer’s conduct as "scary" and said she ended their relationship when he began setting rules for her.

Lorenze also claims Hammer told her he wanted to "eat her ribs".

Eventually Effie Angelova, the woman behind the @houseofeffie account came forward with serious rape allegations against Hammer, saying he had attacked her over a period of over four hours.

Has Armie Hammer been charged?

The accusations against Hammer were damning in the eyes of the public and, although one serious criminal allegation was made, no charges have ever been brought against the actor.

For his part Hammer denies that any non-consensual behaviour occurred and has never even confirmed if the messages displayed are from him.

According to a Vanity Fair article published in May 2021, friends have (off the record) defended him and said he’s a nice guy who enjoys kinky sex. Others say that the furore comes down to a misunderstanding of cannibal fetishism, whereby fantasies are verbalised but not acted out.

It’s certainly the case that none of Hammer’s accusers have alleged he actually ate anyone.

Hammer’s family history is certainly littered with salacious and potentially criminal behaviour, as well as famous names, with his great-grandfather linked to the American political elite, the British royal family and big names in the politburo during the Soviet-era.

Descended from Russian immigrants the family made fat profits from the oil business in the 20th century, with tycoon Armand Hammer (Armie’s great-grandfather) known in the American press as "Lenin’s chosen capitalist".

The documentary is released on 2 September and will feature on-camera interviews with two of Hammer's alleged victims. It will no doubt prove a major talking point; whether it will end up as hard-hitting as other celebrity exposes like Surviving R. Kelly remains to be seen.

You can watch the trailer for House of Hammer in the video above.