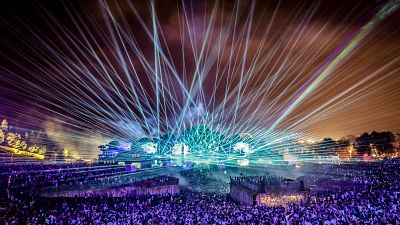 Festival-goers from around the planet return to Tomorrowland   -   Copyright  Jonas Roosens/AFP
By Theo Farrant  with AFP  •  Updated: 18/07/2022

Tomorrowland, one of the world's biggest EDM (Electronic Dance Music) festivals, has made its return after a two-year hiatus due to the pandemic.

The festival, which welcomes around 600,000 party-goers from more than 200 countries across three weekends, takes place in the Belgian town of Boom.

Since its inception, the festival has been on the bucket list of every dance music lover - and for good reason.

What makes Tomorrowland so special?

It combines the very best of EDM, house, drum and bass, techno and trance music with spectacular pyrotechnics, elaborate stage production and unforgettable lineups to rival the likes of Glastonbury, Burning Man and Coachella.

For organisers and frequent Tomorrowland attendees, this year's return has been a long time coming.

"We can party, we can hug, we can kiss, we can do whatever we like. And we hope it stays like this for the coming years. But it was quite difficult to start it because it has been a long time since a festival. But we still are full of positive energy and we're really happy to be here again," explains Debby Wilmsen, Tomorrowland's festival spokesperson.

One of Tomorrowland's most unique features is that it's a cashless festival - attendees use an imaginary currency named 'Pearls', which can be added to contactless bracelets online before the festival.