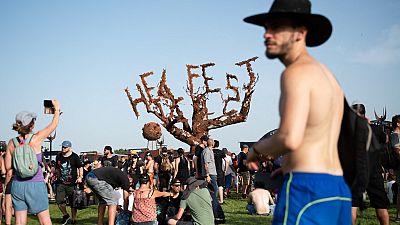 Backpack strapped up tight, smartphone in hand, Géraldine Vallée zig-zags through the crowds of revellers at Hellfest, a heavy metal festival in western France.

With one eye glued to the screen, the volunteer monitors an application through which festival-goers can report sexual assault or inappropriate behaviour. If called upon, she is ready to tackle abuse and support victims in any shape or form.

26-year-old Vallée is a member of 'Hellwatch', an innovative volunteer brigade set up by Hellfest to help people feel safe and prevent harm at their festival.

"When an alert is displayed, we geolocate it and the nearest team goes immediately to the site", says Vallée, who wears an orange and white t-shirt marked 'Hellwatch'. Her top is also adorned with an image of Valkyrie, a female warrior in Norse mythology.

Using the Safer application, revellers can issue an alert according to the degree of urgency they feel, with options of "I'm embarrassed", "I'm harassed" or "I'm in danger".

Vallée is one of 60 volunteers (30 for each of the event's two weekends), who patrol the Hellfest's many stages, bars and showers in small squads.

During the first weekend of the festival in France's western Loire-Atlantique region, between 17 - 19 June, several reports were made on the app, according to the 'Hellwatch' team leader, David Alglave.

Young women in particular claimed to have been touched by men in dense and agitated crowds. Others mentioned inappropriate gestures under the water jets installed to refresh festival-goers.

Hellfest organisers asked Alglave, a clinical psychologist, to set up the vigilance brigade, after numerous women said on social media they suffered sexual abuse at the festival in 2019.

"The atmosphere of Hellfest has always been fraternal and benevolent. But like all festivals, we are not immune to unacceptable behaviour," said event organisers, adding that they wanted to "take the lead" following the women's online testimonies.

The majority of the Hellwatch team is made up Alglave's young colleagues and psychology students. The volunteers are "capable of collecting the words of victims in a state of shock." All are trained before the festival to deal with gender-based and sexual violence.

Alglave claims that even the very presence of Hellwatch can deter inappropriate behaviour, albeit to a "certain extent."

However, only in their first year, the team at Hellwatch say their initiative is constantly evolving and they have plans to expand into the campsite area of the festival.

"The goal is not to feel vulnerable just because you're a woman," said Alglave. "Never, nowhere."