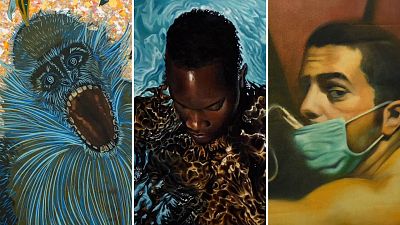 It's the highlight of the contemporary art world of the German capital.

The Berlin Biennale runs every second year at venues around the city and this is the 12th edition.

And unlike 2020's show, this year the festival can take place almost without any COVID-19 restrictions.

Artists from around the world are showing their paintings, sculptures, installations, and videos.

This year's edition is called 'Still Present!' and there is a clear focus on artists from the parts of the world that don't belong to the so-called West.

Under the artistic directorship of French artist Kader Attia, themes like de-colonization, and restitution are presented in the four venues.

What's on show at this year's Berlin Biennale?

In total, some 70 artists are presenting works at the show. Some are based in Berlin, but most have travelled to the German capital – also something that was difficult or impossible at the height of the pandemic.

A standout of this year's show is Congolese artist Sammy Baloji's installation '…and to those North Sea waves whispering sunken stories'.

The artist invites his audience to reflect on the modern day era with its roots in imperialism and colonialism.

Central to the installation is a greenhouse, a modern variant of the 'Wardian case', used for transporting exotic plants to Europe during the colonial period.

For Baloji, it is a metaphor for how men from the colonies were deployed in the war in Europe.

Rasha Salti, one of four curators of the exhibition, also explains the symbolism of lines of red thread which run throughout the various venues.

"The red thread that you viewers can discover throughout the various exhibition venues, they are about the legacies of the wounds. And how we might repair them. There are artworks that are addressing the legacy of fascism but also how fascism is present today. In everyday life," she says.

There are also works that focus on climate change and the destruction of nature.

But the hope is not to change visitors minds, says Salti. But perhaps nudge them a little bit.

"What art can do is provide an experience of otherness. Of time. Of enchantment. Of poetry. It cannot change the world, but it can perhaps induce a slight shift of perspective," she says.

One of the artists from this year's show is Deneth Piumakshi Veda Arachige - who is originally from Sri Lanka but now lives in France.

With photography, video, sculpture, and installation, the artist narrates the story of her ancestors, the Indigenous Adivasi (formerly known as Vedda) people of Sri Lanka.

"My work here for the Berlin Biennale is focusing about de-colonisation. And restitution. Especially in the field of restitution about our ancestral remains that is kept in European museums and institutions," she says.

Using her own body as the basis for one sculpture titled 'Self-Portrait as Restitution – from a Feminist Point of View', Arachchige holds a replica of the skull of an Adivasi man that was removed by the Sarasins.

She hopes that a few European visitors will leave with a new perspective of the years of colonisation.

"I'm not a historian or anthropologist. But I am a human being and an artist coming from Sri Lanka. Born, brought up and educated from Sri Lanka. So for me as an artist, as a woman artist, it is very important to raise this issue. And bring these important topics, and archives to the surface of European society," she says.

The Berlin Biennale for contemporary Art opens to the public on June 11 and runs through September 18 2022.