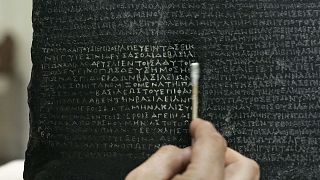 The Rosetta Stone undergoes the last stages of its conservation at The British Museum,   -   Copyright  Edmond Terakopian/2004
By Theo Farrant  •  Updated: 30/11/2022

The Rosetta Stone is one of the most famous and important ancient artefacts in the world.

The multi-translated inscriptions on the black granite slab revolutionised our understanding of Egypt's ancient languages and society, and signified the birth of Egyptology.

200 years later, the stone still captivates millions of visitors at the British Museum in London, as one of more than 100,000 Egyptian and Sudanese relics housed in their collection.

But more and more voices in Egypt are demanding the museum repatriate the artefact, in a bid to reclaim their history from its colonial past.

The discovery of the Rosetta Stone

The stone slab was discovered near the town of Rashid (Rosetta) in 1799 by French soldiers, who belonged to Napoleon Bonaparte's army during his campaign to conquer Egypt.

It quickly found itself in possession of the British after they defeated the French in Egypt in 1801, and the following year it was transported to the British Museum in London.

The significance of the Rosetta Stone was almost immediately recognised.

It featured three panels of writing: one in Ptolemaic hieroglyphs, one in an unknown language (demotic) and the other in Ancient Greek, which was well-known and understood at the time. The stone's text was a decree issued in 196 B.C. by a group of Egyptian priests, honouring the then child-pharaoh, Ptolemy V.

At the time the stone's hieroglyphs were a great mystery to the West and it wasn't until 20 years later that its code was cracked.

Though a number of scholars across Europe contributed to the work, the puzzle was solved thanks in large part to the work of English physicist Thomas Young and French scholar Jean-Francois Champollion, who were were able to decipher the hieroglyphic code in 1822.

The invaluable information garnered from the Rosetta Stone then became the backbone for all of Egyptology. It was used to decipher other texts written in hieroglyphs, unlocking the undiscovered secrets of Egypt's ancient civilisations, hence why it's considered one of the most importance objects in history.

Calls for its return 200 years on

Today the Rosetta Stone, which measures about 44 inches tall and 30 inches wide, still resides at the British Museum.

However, there have been repeated demands from Egypt for the stone to be repatriated back to its home.

"We demand that our antiquities are returned to us as they were sent aborad illegally," says Egyptologist Ali Bash.

"Today, the Rosetta Stone for me, is a symbol of western colonialism over my culture,” said Monica Hanna, dean at the Arab Academy for Science, Technology & Maritime Transport, and organiser of one of two petitions calling for the stone's return.

Hanna’s petition, with 4,200 signatures, says the stone was seized illegally and constitutes a “spoil of war.”

The claim is echoed in a near identical petition by Dr Zahi Hawass, Egypt’s former minister for antiquities affairs, which has more than 100,000 signatures.

"Rosetta Stone was stolen. France took it and sent it as a gift, illegally, to England. This stone is the icon of Egyptian antiquities," says Hawasss.

Hawass also wishes for the return of other famous Egyptian artefacts currently in European museums, such as the bust of Nefertiti and the Dendera Zodiac (both currently in the Louvre).

"These are unique objects, their home should be in Egypt, not Germany, England, or France".