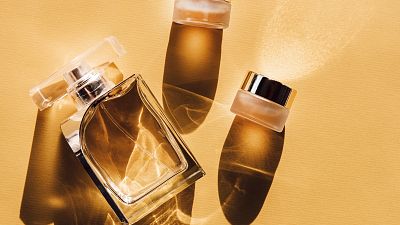 Animal instinct or considerate gift? Diving into the truth about perfume this Valentine's Day.   -   Copyright  via Unsplash
By Tim Gallagher  •  Updated: 14/02/2022

Civet musk, or civetone, is harvested from the feline anus of a civet cat and was at one time a sought after ingredient in the perfume industry.

Due to a belief that the animals’ distress would increase the amount of civetone produced, the cats were often kept in cruel conditions to maximise harvests.

Luckily, these days a more ethical approach is taken to the scent and a replacement in the form of a synthetic compound is used. However, once you know about the origins it’s difficult to shake it off when buying a bottle of Calvin Klein’s Obsession for Men.

“The cologne has even had success luring big cats such as tigers and cheetahs thanks to their attraction to the pheromone found in civetone,” says Rich Quelch, fragrance expert at Lifestyle Packaging.

The bizarre origins of scents don’t stop there, with many notes that are right under our noses having their origins in the animal kingdom.

Musk, an ingredient that’s present in perfume classic Chanel No.5, originally came from a brown liquid a male deer excretes to attract a mate, and some vanilla scents previously came from a gooey bodily fluid beavers use to mark their territory rather than from plants.

Meanwhile, as revealed in the documentary ‘Nose’, ambergris is still used by Dior in their products Miss Dior and Dior Sauvage.

The ingredient, referred to as “the faint stream of perfume” by Herman Melville in his novel Moby Dick, comes from the digestive fluid of a sperm whale.

At one time it was so sought after that Irish peasants were forced to surrender any that washed up on the shoreline to their Lord, and its price tag has persisted to this day. In 2020, a Thai fisherman found the world’s largest sample of ambergris, valued at a staggering €2.86 million.

Smelling is clearly big business, but are perfumers simply cashing in on an animal instinct? Or is there more to this mysterious science and million euro industry?

“It is the oldest sense,” says Shibani Mohindra, co-CEO of Celessence Technologies.

Mohindra is a trained ‘smeller’ and learned how to discern scents in the perfumeries of Paris when she began working in the fragrance industry. The expert claims at one time she was incapable of smelling someone’s perfume without deconstructing it with her finely tuned nose.

Mahindra's company is releasing a line of garments fragranced with aphrodisiac scents for Valentine’s Day including lingerie and bedding.

The top notes in the fragrances are classic citruses and the centre is jasmine and ylang-ylang, but there is also patchouli and sandalwood to help soothe anxieties in the bedroom.

“You can raise your desire but actually, you’re in a better mood if you’re more relaxed,” Mohindra says.

Elsewhere ‘Bee Venom Queen’ Deborah Mitchell is a fervent believer in the power of smell.

“Smell actually releases hormones in the brain, it is more important than people realise,” says Mitchell.

Already renowned for her successful line of bee venom cosmetics, Mitchell created her perfume through a visceral process of physically touching ingredients to see what attracted her.

The end product is a sensual perfume filled with cedar notes and sandalwood, designed to break down the invisible barriers between the wearer and other people.

Are we all just animals after all?

With all the hormones, deer secretions and whale digestive fluids floating around it can be easy to start thinking of perfume as a primal game.

However, maybe it's better to think of smell as a culturally defined pheromone phenomenon.

Previously Mohindra travelled Asia building a ‘smell vocabulary’; a catalogue of culturally defined scents, leaving the CEO with a healthy understanding of the cultural specificity of smell.

“If you create a romantic scent, romantic means something different in Indonesia or Brazil, or the UK or France,” says Mohindra.

Smells are known to stimulate the part of the brain that stores memories and emotions, making it a deeply personal scent. Mohindra identifies her favourites as common insect repeller lemongrass eucalyptus or even cow dung cakes.

“For me, that is a beautiful smell because it is the hillside in India,” she says.

Meanwhile, Mitchell created her product in response to her dislike of synthetic perfumes, claiming they give her a headache. But does she think buying perfume is romantic?

“I think to buy somebody some perfume that you know that they love is very special but a bloke picking up any old perfume without really thinking about it, that is just thoughtless,” says the Bee Venom Queen.

Maybe we can learn something from the animals - we certainly seem to have taken many of our scents from them at least - but to reduce your favourite scent to basic instinct seems a mistake.

But whether you think our sense of smell is a primal response from Mother Earth or a personal and cultural cache of emotion, next time you’re browsing the perfume aisle looking for a Valentine’s Day gift, a whale's stomach or a cat’s anus may not be your best inspirations.

The story behind 'Baci': Europe's most romantic chocolate turns 100

Sting sells back catalogue to Universal as stars buy into licensing