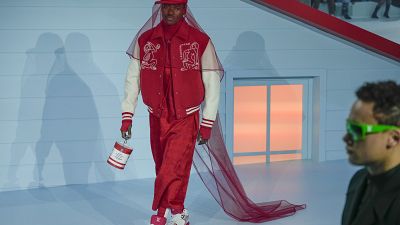 Louis Vuitton pulled out the stops this week to present the final collection of Virgil Abloh, the house's first African-American creative director.

Abloh died in November after a two-year battle with cancer, causing shock and grief in the fashion world and far beyond. One of his famous quotes "Life is so short you can't wait even a day" was included in the Louis Vuitton show notes.

The show was staged with a bedroom, staircase, trampoline and smoking chimney on the central Paris runway; conjuring up nostalgic images evoking Abloh's childhood, and reflecting themes that defined his Louis Vuitton aesthetic.

The runway display began with model-acrobats repeatedly bouncing down onto a hidden trampoline and back up onto a flight of ascending stairs. Meanwhile, big peaked ears on Batman-like caps evoked Abloh’s childhood obsessions, as did oversized baseball headwear and graffiti-style prints.

Loose peaked-shoulder suits, often long in proportion, defined much of the aesthetic which riffed on basketball attire and the street. Despite the nostalgia, the designs had a typically aggressive edge from the erstwhile collaborator of Kanye West.

Abloh's street-infused styles had marked a departure for the house from the more luxurious styles of his predecessor, British designer Kim Jones. Now the big question is whether Vuitton will continue in Abloh's vein, or change tack again.

It is a sign of Abloh's popularity that Louis Vuitton presented the show twice on Thursday.

Who else is on at Paris Fashion Week? From the avant garde to the practical

An eccentric show was mounted by designer Rick Owens that saw a darkened venue lit by models with strobe lights on their heads.

Owens’ designs are highly inventive and featured studded neck chokers, zipped hoods and headwear in puffer material that appeared on models to completely obscure their faces.

Woollen "drella" coats were tied around models like ponchos, just one of the many interesting oversize and trapeze silhouettes in this fun line up which also saw black helmets with near-one-metre strobe lights attached grace the runway.

Designers Daniel Brix and Philip Lotko — who met at Denmark's TEKO Design School, before founding the label in 2012 — have made the raincoat into the brand's piece de resistance. In Thursday's show the puffer coat was the main theme, used creatively to span rainy weather to interplanetary travel.

Utilitarian toggles and straps flap about on oversize looks. Lotko has described the brand's mission as "focusing on and elevating functional design."

Anorak yellow was used with aplomb on several looks including a cross-over puffer shawl, which twinned the Asian style with the concept of an emergency heat blanket; one of the brilliant twists that has cemented the brand as an important voice in fashion forward men's designs.

Paris Fashion Week has always been a moment to showcase emerging talents, and this year’s mixture of online and in-person shows has been no different.

AMI designer Alexandre Mattiussi pulled in VIPs such as actresses Catherine Deneuve and Isabelle Huppert for a socially distanced runway showcasing what the designer does best; wearable, masculine, boxy clothes, served up with a flash of camp colour, feathers or sparkles.

The time dial was turned to the 90s with a predominance of statement coats: Varsity sports styles, oversize monochrome check jackets, a giant oversize number in shocking pink and the giant furry coats of that decade.

Meanwhile, Steven Passaro took advantage of the new hybrid calendar with a digital show for his first time on the official Paris Fashion Week lineup.

The 29-year-old said he wouldn’t have the money to stage a full Paris Fashion Week show but a video was accessible.

"This is my first time on the calendar. It was possible because the (fashion) federation didn't want me to do a show. Making a video means spending way less money," Passaro said.

Passaro’s aesthetic mixes couture with applied tailoring and an emphasis on hypersensitive looks, he graduated from London College of Fashion before founding his eponymous brand in 2019.

Cultural fusion and a melting-pot mentality were elemental for designer Anthony Alvarez as he staged his first on-calendar show for his fashion label Blue Marble, which celebrated the designer’s mixture of Filipino, Spanish, French and Italian roots.

The collection communicated a globe-trotting vision through eye-popping colour and myriad references. The first looks were said to be inspired by the hue-rich sails of traditional boats in the Philippines.

Ulliel died Wednesday after a skiing accident in the Alps. He was 37.