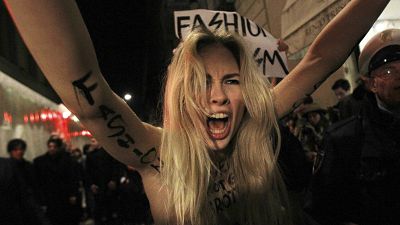 A topless Ukrainian activist of the group "Femen" shouts as she stages a protest at the entrance of the Versace Women's Fall-Winter 2012-13 in Milan   -   Copyright  Antonio Calanni/AP
By Olivia Pinnock  •  Updated: 05/03/2022

In the midst of Milan Fashion Week, the most inspiring street style was not to be found outside the shows of the hottest Italian designers but gathering outside the world's parliamentary buildings.

In cities across the world from Tallinn to Tokyo, Tehran to Tbilisi, protesters gathered over the weekend brandishing the signature blue and yellow of the Ukrainian flag to show support as Russia declared war on its neighbour. An image of an elderly woman dressed in a blue headscarf and yellow jacket, reportedly taken on the Moscow metro, went viral for the brave message of solidarity it sent.

Early signs of the fashion industry wishing to use its voice for the cause also emerged. Giorgio Armani hosted a silent fashion show to acknowledge the sombre mood. One showgoer was spotted outside the Prada catwalk carrying a white bag brandished with “No War In Ukraine” in red letters. At the SAG Awards in California, actress Greta Lee walked the red carpet in a blue and yellow Marc Jacobs ensemble that many took to be a show of support for Ukraine.

What we wear has always been a silent way to share part of ourselves with others and has a long history of being used as a tool for protest. Costume designer and author of Dressing the Resistance: The Visual Language of Protest Through History, Camille Benda says: “Regardless of how obsessed we are with clothing as a person, we do send messages with our clothes. That is a way for us to share information about ourselves with other people. Add your political views or your activist views to that and your clothing can become a canvas.”

In some cases, this can very literally be a message printed or painted onto clothing, as with the infamous slogan t-shirts first popularised by British fashion designer Katharine Hamnett in the 1980s. Hamnett wore one of her own designs which read “58% DON’T WANT PERSHING”, a message against nuclear weapons to a reception with then prime minister Margaret Thatcher and went on to create the now infamous “CHOOSE LIFE” t-shirts of the era.

Other times, the message might be more subtle, using the codes and messages that already exist in clothing. Benda has noticed this in the use of Ukrainian folk dress in the recent spate of protests. “I’ve seen a couple of great photos of Ukrainian women wearing flower crowns. That is a typical Eastern European decoration for a woman getting married or a celebration. And then there are the headscarves, I think that's very much referencing the lace and linen headscarves that women would wear with traditional folk dress. It’s the idea of ‘this is my country and my country is represented in the folk dress and the folk art.’”

During the American civil rights movement, the likes of Martin Luther King Jr and Malcolm X wore suits as a way to garner respect and elevate themselves to the same status as the president. Suits were also adopted by the British Teddy Boy subculture of the 1950s but were a way to stand out rather than blend in. Inspired by a mix of Edwardian flamboyancy and American zoot suits, the heavily stylised appearance of these working-class young men was a way to differentiate themselves from the older generation and made teenagers synonymous with rebellion against their elders from there on.

In Nazi-occupied Paris, couture houses were closed to shutter something so economically and culturally important to the French, but some wealthy women would secretly commission couturiers to make clothes for them. Outwardly, they would appear plain and simple, but they would know it had been made with the talent and craftsmanship of a French couture house as a subtle form of protest.

In recent years, global fashion brands have jumped on the trend for political dressing. Last September, Valentino produced a hoodie which replaced its logo with the word “vaccinated”, annual LGBTQ pride collections have become a staple for brands including Levi’s and Coach, and feminist slogan t-shirts have become a regular on the Dior catwalks under the creative directorship of Maria Grazia Chiuri. Some may feel cynical at the concept of corporate entities using important political messages to sell clothes, but the phenomenon is not new.

Suffragettes in early 20th century Britain adopted a uniform of white, purple and green, symbolising purity, dignity and hope. Jewellery using peridot, amethysts, pearls and other precious materials representing the colours of the movement were a way for women to align themselves with the movement and in 1908, silversmith Mappin and Webb produced a range of Suffragette jewellery for its Christmas catalogue.

While it may be a bit too soon for physical clothing brands to bring a collection in support of Ukraine to market, the speed at which a digital clothing collection can be produced and disseminated has led to a new form of protest dressing emerging in the digital age.

DressX, a digital clothing retailer, has created a range of AR filters including a bucket hat with “Act Now” written across it, a sweatshirt stating “I stand with Ukraine”, a heart-shaped dress and a pair of heart earrings, each in blue and yellow, for users to share on social media in exchange for a donation to charities supporting Ukraine.

The issues we are fighting for as a society may change, but our instinct to wear our politics on our sleeve unites us with the people of the past who changed the world. As the war in Ukraine rages on, blue and yellow look set to pervade society from the red carpet, to the city streets to our social media feeds.