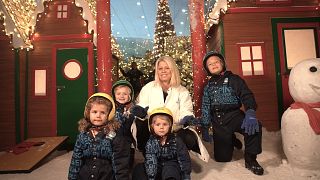 As Christmas nears, the expat and local community in Dubai comes together to celebrate the holidays. From winter markets to tree light illuminations the festivities are a festive feast.

Marcus Sutton is the General Manager of Zabeel House by Jumeriah The Greens, a neighbourhood hotel in the heart of the city.

He told Euronews, “One of the things about our neighbourhood is that it’s made up of many different people, from many different countries. For us, it’s really important to have an event in the hotel that brings those people in to celebrate as one. Especially for events such as Christmas when many people are away from their families. When we put on events such as the Christmas Tree lighting, it allows our guests, visitors and neighbours to get a feeling of what they would usually experience at home.”

Dubai’s theatres and opera house are awash with pantomimes and show stopping performances like the Nutcracker and Elf the Musical, which has arrived in Dubai with a cast from London’s West End. It’s based on the film and brought to life on the stage by Olivier Award-winning producer Paul Taylor-Mills who says, “When you’re bringing in a show from a film to the stage there are differences and it’s able to be more vivid. It’s a one act so no interval. Straight through. And what the film doesn’t have is incredible dance sequences, these incredible costumes and this incredible all-star West End cast in Dubai, most of them for the first time.”

Local schools have had an abundance of festive activities in the run up to the end of term. Clare Turnbull is Principal of Royal Grammar School Guildford Dubai and explains that it’s a time to bring the community together and ‘have some fun.’

She adds, “We've got Christmas decorations all around. We're also being really careful to say that this is Winter Wonderland. Totally inclusive. But we are also making sure that for our expat families, for whom Christmas is such an important moment, they can celebrate it here in the school community.”

Winter Wonderland at Ski Dubai is a stalwart of the Dubai Christmas season and a must for anyone wanting a white Christmas in the desert. Children and big kids alike get to visit Santa Claus in his grotto against a backdrop of white slopes and enjoy a cup of hot chocolate before tackling the ice luge!

From the markets to a skate on the frozen lake and Santa letter writing stations, you’re spoilt for choice with Christmas cheer on every corner.

The weird and wonderful world of Dubai gardens