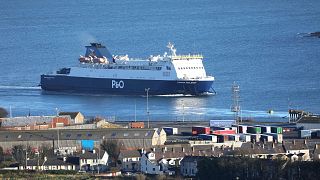 The ferry service made headlines in March abruptly sacking 786 workers via a video message.

Dubai-based DP World, which owns P&O, told a parliamentary inquiry that the operator had “no future” unless it replaced staff with cheaper agency workers.

In a statement on the company’s website, DP World CEO Sultan Ahmed Bin Sulayem said he was “delighted to report a record set of first half results” with revenue growth of 60 per cent year-on-year to $7.9 billion (€8 billion) and profit growth of over 50 per cent to $721 million (€722 million).

Most of the profits were derived from the company’s cargo business, not its ferries.

But the Trade Union Congress - which represents 48 UK unions - slammed the outcome.

“This is an insult to common decency,” tweeted TUC General Secretary Frances O’Grady.

Why did P&O sack its workers?

In March, P&O sacked nearly 800 sailors without notice or consultation.

It replaced them with staff on flexible contracts paying an average of £5.50 (€6.50) per hour - well below minimum wage, but legal due to the ‘offshore’ nature of the contracts.

But the move drew widespread condemnation, sparked union protests and led to disruptions to key tourist and goods routes.

The head of the ferry operator subsequently admitted that the company chose to ignore the law by sacking its workers without consulting them in advance.

But on Friday, the UK insolvency service - the government agency tasked with investigating companies accused of financial wrongdoing - announced that it would not pursue criminal charges against P&O bosses. A civil case is ongoing.

O’Grady demanded that the Insolvency Service give a “clear explanation” for the decision to abandon criminal proceedings.

"Our laws should protect working people from companies that brazenly flout the rules and treat staff like disposable labour,” she said.