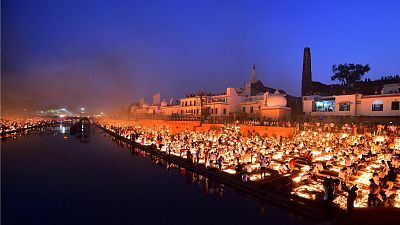 On the eve of Diwali, the Hindu festival of light, the Indian city of Ayodhya broke their own world record.

Ayodhya kept its Guinness World Record for a third year by lighting 900,000 oil lamps and keeping them burning for at least 45 minutes as part of it’s Diwali celebrations.

Thousands of volunteers lit the lamps, called diyas, along the town’s Saryu riverbank, through lanes and outside houses, bathing the town in beautiful lamp light.

Diwali is a festival of light celebrated by Hindus, Sikhs, Jains and some Buddhists.

Ayodhya is where Hindus believe the god Rama was born and so in this part of India Diwali is also a celebration of the day the God Rama returned to the town following a 14 year exile.

Representatives from Guinness World Records presented Yogi Adityanath, the state's top elected official, with a certificate after monitoring the ceremony with drone-mounted cameras.

Watch the video above to see the beautiful Diwali celebrations.