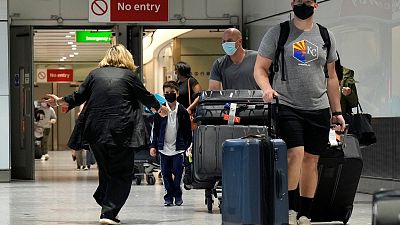 Arrivals at Heathrow Airport. The UK has been shortening its red list for months.   -   Copyright  AP Photo/Matt Dunham
By Lottie Limb  •  Updated: 28/10/2021

The UK government is removing all countries from its red list for international travel, it announced this afternoon.

Only seven countries remained on the list after the previous update this month, but travellers from Colombia, Ecuador, Dominican Republic, Haiti, Panama, Peru and Venezuela will no longer need to quarantine on arrival.

The list - which was designed to categorise the countries posing the highest COVID-19 risk - will remain in place, however.

“All seven remaining countries on the red list will be REMOVED from Mon 1 November at 4am,” he said.

But the red list will be kept in place “as a precautionary measure to protect public health and [we] are prepared to add countries and territories back if needed, as the UK’s first line of defence,” he added.

UPDATE: All seven remaining countries on the red list will be REMOVED from Mon 1 Nov at 4am ❌

More countries' vaccines to be recognised in the UK

This wasn’t the only change to the UK’s travel policy that Mr Shapps announced.

He also revealed that the vaccine certificates of over 30 new countries and territories will be officially recognised by the UK from Monday, including Peru and Uganda.

This means that travellers from these countries will no longer face a day 10-day quarantine period on arrival in the UK, and only need to take a rapid antigen test on or before day 2.

It brings the total number of nations whose vaccines are accepted by the UK to more than 135.

For full information from the UK government, including travel rules, check their website.