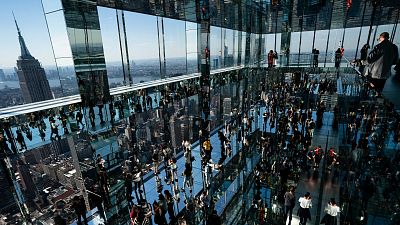 Have you ever wondered what it feels like to hover 1,000 feet above the ground?

A new tourist attraction in New York is allowing guests to experience precisely that.

Titled ‘Air’, it was created by Kenzo Digital, an experimental multi-media artist whose work ranges from feature films to live productions with Beyonce.

His most recent exhibition takes place inside One Vanderbilt, now the fourth-tallest building in the Big Apple.

A glass elevator takes guests up the side of the building in Midtown Manhattan reaching 300 meters in just 42 seconds.

Once there, they are greeted by three floors of glass and mirrors offering “euphoric” views across the city.

American record producer Nick Barat was among the first to visit the installation.

"It makes you think about the relationship you have with the city and yourself," he says, comparing it to other New York attractions such as the Empire State Building.

“I think it’s a microcosm of the city as a whole. This doesn’t belong to any one person. We all share it.”

How tall is One Vanderbilt tower?

One Vanderbilt was officially opened on 14th September 2020. Including its spire, it is 1,401-feet high with 93 floors.

The observation deck on the top floor is called ‘Summit’. It is home to a green space advertised as ‘the world’s highest alpine meadow’.

From here visitors can see for over 100 kilometres.

Tickets to ‘Summit’ are €33.50 and include access to Après, an exclusive food and cocktail concept with panoramic views across the city.