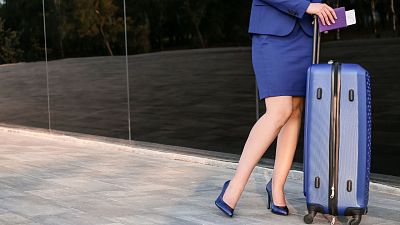 We’re all used to a certain etiquette on planes. Abide by the seat belt signs, turn electrical devices off during take-off and landing and fight for an armrest when you’re in the middle seat.

But there’s another feature of flying we take for granted - we’re used to a female cabin crew dressed immaculately, in high heels with their hair up in a bun.

Recently, however, one Ukrainian airline has decided to do things a little differently and adopt a more comfortable dress code.

What does a comfortable cabin crew uniform look like?

The airline has replaced the classic skirt suit with trousers and heeled shoes with trainers. There have also been changes to the guidance on hair and makeup.

"The employee has many options for how to style her hair, depending on her preferences. And the makeup has become more pleasing to the eye thanks to the use of colours that can be seen from the cockpit," says Marianna Grygorash, Head of Marketing at the Ukrainian company, SkyUp Airlines.

Flight attendants will wear the new uniforms, created by two well-known Ukrainian fashion brands, as of this autumn.

"For maximum comfort during work, there will be no more shoes with heels, only sneakers. The same applies to pants. However, it is possible that elongated loose-fitting shorts will appear in the summer version of the uniform," says Grygorash.

So while some of the guidance (i.e. on makeup colours) seems to be on aesthetic grounds, the uniform itself is to encourage women to feel more comfortable while doing their job 30,000 feet in the air.

The company's representative says it proposed the new dress code after a series of interviews with the cabin crew, where certain concerns were highlighted.

"We have highlighted one of the globally important topics - women's rights and gender equality,” explains Grygorash.

"We hope that this will become an impetus for global positive transformations in views and attitudes towards the treatment of women not only in aviation, but entirely.

Others argued that the classic uniform should remain in place, just like the dress codes for lawyers and other professions.

"A woman in any field should have comfortable working conditions, and the ‘trademark’ of the crew should not necessarily include heels and a classic suit," she says.

The initiative has sparked debates on social media.

"Isn't it time these kinds of outdated policies objectifying women are eradicated for good?," supporters of the new idea posted. Others argued that the classic uniform should remain in place, just like the dress codes for lawyers and other professions.

What do flight attendants think of the new uniform?

“I adore free-cut suits and I enjoy wearing them in my daily life. So when I learned that we would have the same costumes at work, I was really happy about it. After all, it has a stylish, comfortable fit, and bright look," Maryna says.

“On average, we spend 6 to 12 hours a day on board, so a comfortable uniform for us is an extremely important element of work. Shoes, even with heels, are, of course, beautiful, but it is not comfortable to stay in such shoes for a long time.

Heels, are, of course, beautiful, but it is not comfortable to stay in such shoes for a long time.

“The world is changing, and we are changing,” she adds.

Some cabin crew members are not so keen though.

Ines de la Fuentes is another 26-year-old flight attendant who worked for a middle-eastern airline for almost two years until she was made redundant in 2020 due to the COVID-19 pandemic. She explains that on flights, she had to choose from the following options of formal shoes: high heeled, medium heeled and flats.

"These two last are very comfortable to use during service duties. However, a female crew member can't use the flat shoes unless she is doing on-board service related duties. For boarding and disembarking of customers, a crew member would have her high or medium heel on and later on, after take-off, she would change into her more comfortable shoes," Ines says.

Wearing different types of shoes during service are required for safety reasons as well, in case of an emergency.

But despite all this, Ines liked wearing her medium heels.

I think the typical uniform is definitely a trademark and part of the glamour and mystery that surrounds the aviation industry.

"Medium heels always felt very comfortable to me personally, so I have never tried the flat crew shoes. Hence I don’t think such changes in uniform are necessary because I did love wearing my iconic red heels," she says.

"I think the typical uniform is definitely a trademark and part of the glamour and mystery that surrounds the aviation industry and its employees."

"A pilot's uniform is also very symbolic and no one would think to change it. It's what makes our jobs extra special," adds Ines.

Kim Wijnands, 28, who worked as a flight attendant for TUI and Corendon Dutch Airlines, acknowledges that even when heels look very classy with the uniform, they aren’t always comfortable.

"You can imagine if you have a long duty and you have to switch from service shoes to your high heels at the end of the flight, when you disembark the aircraft, your feet don’t like it that much. But it’s part of the job. No pain no gain," Kim says.

"Although the uniform will be adjusted to be very comfortable and modern, in my opinion, it won't be elegant. Heels look also more feminine, they emanate class and a sort of status," she continues.

No pain, no gain.

"For long haul-flight I won’t deny it would be such a relief for your toes to wear sneakers, but I think the crew won’t look great," she says.

As for the uniform itself, Kim concedes that sometimes your “tights are pinching your belly” by the end of the flight, so looser, more comfortable clothing would be preferable.

What about ‘sporty’ uniforms?

Kateryna Kovalchuk, who worked as a cabin crew for almost six years in the Middle East, says that during her career she experienced a change in uniform and shoes.

The problem was, her new suit wouldn't allow for easy movement and the shoes, despite having low heels, were still painful to wear.

"Eventually it did improve with more changes later, but we all understood how crucial it is to have comfortable shoes and the whole uniform in this job for all kinds of flights," Kateryna says.

For Kateryna, a more sporty alternative would be the best option.

"Today, as athleisure is a trend, we could safely assume that a uniform could look elegant and be comfortable at the same time,” she says.

"Personally I am all for those changes, because it is healthier and less tiring to wear sportswear and comfortable shoes if you have to stand and walk a lot.

"It would definitely be a big plus if the flight attendants would have a choice in that."

‘It’s not impossible’: Meet one of India’s pioneering female pilots