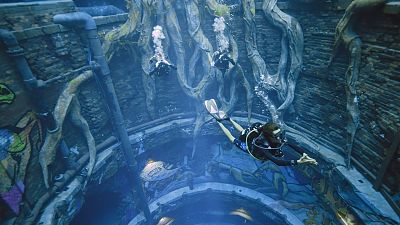 The world's deepest pool, which is big enough to fit a 20-story building in it, was unveiled in Dubai on July 1.

It has entered the Guinness World Records with a depth of 60.02 metres, overtaking the former record holder in Poland at 45-metres deep.

Deep Dive Dubai could be mistaken for a normal pool from the surface; however, what lies beneath is a mind-blowing feat of engineering and creativity.

The theme of the pool is a post-apocalyptic underwater city and as divers go deeper into the water, the landscape changes to show nature taking over the urban setting.

The pool features objects that more commonly are found in a street rather than submerged in water, such as a car and a motorcycle. Divers can follow the graffitied walls towards the dive shaft, where they will find entertainment including games like foosball and pool tables, as well as a pinball machine.Exploring some of the darker corners of the pool, divers can find the remains of an apartment hidden behind crevasses in the walls of the pool.

7 facts about the world's deepest pool

Deep Dive Dubai will open to the public in late July and catering for every level of diver from those who want to dip their toe into the world of diving to certification and training for master divers.

This week in pictures