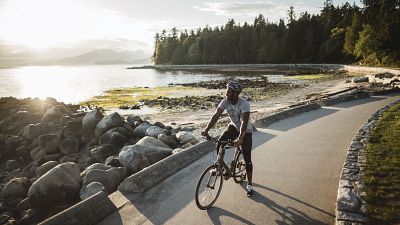 It took over a quarter of a century to complete and is believed to be the biggest volunteer project ever undertaken in the country, but what exactly is The Great Trail of Canada?

Some say it’s the biggest hiking trail on the planet, but this isn’t quite right either. The Great Trail isn’t exactly a single path you can follow from coast to coast, but rather an extraordinary (and the world's longest) network of multi-use trails.

Unique paths, routes, roads, and trails across the country are formed together to create a national network which runs from north to south and east to west. Much of it (over 24,000km) can be walked or cycled, but there are water trails for canoeists, kayakers, and paddleboarders too.

Incredibly, the organisation who helps manage the trail - Trans Canada Trail (TCT) - says that four out of five Canadians live within just 30 minutes of a section of the network. The Great Trail connects over 15,000 communities too, as well as major tourism attractions and natural wonders.

It was reported earlier this year that 60 per cent of adults have found relief from COVID-19 anxiety in nature, so could projects like this be essential to our green recovery in a post-pandemic world?

The largest volunteer effort in Canada

The Great Trail was completed in 2017 to mark Canada’s 150th anniversary, when it was finally fully connected from coast to coast. Although the project started 25 years before, it wasn’t built from nothing.

“The Great Trail of Canada began as a bold dream in 1992, when a determined group of Canadians were inspired to connect local trails, and build new ones, to create a nationwide network of trails,” explains CEO of TCT Eleanor McMahon. “Given the fact that Canada is the world’s second-largest country, it was certainly an ambitious idea.”

The idea was to build a map of routes which would help move people towards nature, while also reducing car accidents involving hikers and cyclists. David Hargrave, who was involved in the project in the 1990s, said in 1994, “we don’t want it along a highway or in a ditch. We want the whole thing to be like a park.”

Over half the trails in the network were already in place, so it was more a matter of linking these disparate routes together. The aim of The Great Trail was to therefore make these routes more usable and increase people’s access to nature.

Perhaps most incredibly, this extensive project was forged through volunteer work, in what is believed to be the largest volunteer effort in Canada.

“Thousands of Canadians joined this movement by donating what they could, volunteering their time and championing the idea of a recreational trail network that could connect diverse cultures, landscapes and communities,” explains McMahon.

Though The Great Trail is technically complete, there are still groups working to maintain, protect, and expand the network. TCT provides funding and support to hundreds of local groups and communities, who have taken on the responsibility of voluntarily managing sections of the trail across the country.

There have been controversies with the project, however. Edmund Aunger, professor emeritus at the University of Alberta, and an “early and enthusiastic supporter” of the trail wrote in 2017 that The Great Trail “has become little more than a dangerous hoax. It is not a greenway; it is a motorway.”

Aunger’s wife, Elizabeth Ann Sovis, was tragically killed while on a cycling holiday along the trail, after she was hit by a drunk driver shortly after leaving the trail. Aunger argues that The Great Trail has not maintained its original vision from the 1990s, and is now “a confusing and dangerous hodgepodge of mountain-bike paths, roadside ditches, dirt ruts, gravel roads and hazardous ATV trails.”

Former TCT board chair Pierre Camu has also criticised the decision to include roads in the trail, saying, “the trail is designed for walkers, hikers, cyclists, children and families. It’s not designed for motorized vehicles.”

Aunger has spent the last eight years campaigning for safer cycling infrastructure along The Great Trail, promoting his wife's legacy, as Sovis had planned to spend her retirement improving the trail's cycling safety.

A spokesperson for TCT says, "we share Mr. Aunger’s concerns about safety on roadways, and we realize that the Trail is not perfect. That’s why we remain committed to converting interim roadway sections of The Great Trail to greenway, wherever possible."

Despite the criticisms of The Great Trail, in the wake of the coronavirus crisis, the benefits of spending time in nature have never been more appreciated.

“As we learn to cope with the many effects of this global pandemic, we have also been encouraged to see so many Canadians turning to trails for physical activity and refuge at this time,” says McMahon.

“A recent national poll indicated that 43% of Canadians who were planning to travel domestically this year are considering using trails as part of their vacation plans. And further that 75% of Canadians use trails on a regular basis.”

There are other advantages to this project too, as it serves to connect businesses, communities, and tourist spots, while also encouraging sustainable transport between these destinations.

“We believe that The Great Trail provides people with opportunities to protect their physical and mental well-being, while helping our local businesses and the tourism sector to recover from the devastating economic effects of the last six months,” McMahon explains.

“We believe that trails have a crucial role to play as we emerge from this crisis, and we look forward to the time when we can once again welcome tourists to Canada, and to the wonders of The Great Trail.”

As The Great Trail continues to improve, this could also be the perfect opportunity to uphold Elizabeth Ann Sorvis's legacy and ensure safe cycling infrastructure is at the forefront of the project's future development.