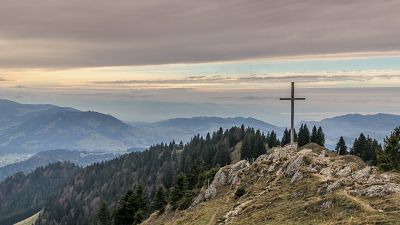 Easter is one of the most important dates in the Christian calendar. In mainstream contemporary culture, it has become characterised by motifs including chocolate eggs, bunnies, lambs and springtime. But in some cultures, there are alternate ways to celebrate the resurrection of Christ.

We take a look at some of the best.

Yes, you read that right. On Easter Monday, local men and boys use willows and ribbons to lightly “whip” the women of the town.

Why? It’s meant to encourage good health and beauty. While we can be 99.9 per cent certain this concept was thought up by a man, apparently the women do actually (thankfully) willingly partake.

There are also some links to fertility, which is a big theme of Easter festivities around the world.

Eating lambs made of butter in Russia

Meanwhile in Russia, Easter dinner is served alongside butter which has been moulded into the shape of a lamb.

Tradition dictates that seeing a lamb is a lucky omen. One thing’s for sure, lambs categorically cannot be Satan in a clever guise because they are the image of innocence and purity, and closely associated with Jesus and God.

Virgin Mary goes for a jog in Italy

The ancient city of Sulmona, in the Abruzzo region of southern Italy, hosts the annual procession of La Madonna Che Scappa (literally translated, it means the Dashing Madonna).

The theatrical display replicates the moment the Virgin Mary sees her resurrected son for the first time after witnessing him die on the cross.

Devoted Catholics carry statues of the risen Christ, Saint John, and Saint Peter, through the town to the Church of San Filippo Neri. Here, they announce the good news of Jesus’ resurrection.

Tobacco trees instead of chocolate in Papau New Guinea

Controversially (but we hasten to add, factually accurate), obesity is a bigger cause of cancer than smoking nowadays.

Deep in the jungles of Papau New Guinea, Easter trees are decorated with sticks of tobacco and cigarettes instead of chocolate. These are handed out to the congregation after the Easter service.

On Easter Monday, the residents of the commune of Haux in southwest France pride themselves on cooking up the world’s biggest omelette.

Made up of approximately 4,500 eggs which are poured into a gigantic pan, the omelette serves 1,000 hungry townspeople. Families break the eggs in their homes, then gather in the town’s central square and cook up a lunchtime feast.

Bunny fans, look away now. While the rest of the world enjoys harmless fun finding chocolate eggs at Easter, New Zealanders from Otago see the springtime celebration as the perfect opportunity for pest control.

Guns to hand, the “Great Easter Bunny Hunt” involves 500 hunters vying for the coveted trophy and $3,500 NZ dollars (€2,000) in prize money for killing the most rabbits.

Crucifixion in the Philippines

In the Philippines, some of the more devout followers of Christ actually practise self-crucifixion and self-flagellation over the Easter weekend. The Roman Catholic Church is not overly keen on the practice, and has been trying to discourage it.

Beware the Easter witches in Sweden

On Maundy Thursday in Sweden, little girls dress up as påskkärringar, or Easter witches.

Wrapped up in rags and old clothes, faces painted and broomsticks to hand, they head out with a copper kettle in the hope of gathering treats from friends and neighbours.

The tradition is based on the belief that witches used to gather at the fictional meadow of Blåkulla just before Easter to plot and scheme with Satan.

In Scotland, families and friends decorate the shells of eggs, take to the top of a steep hill (of which there are many) and let them roll. If your egg travels the furthest without breaking, you win.

Tell us your favourite Easter traditions on Twitter @euronewstravel.

How to choose travel insurance in 2022

Car culture in Cuba: The locals with a love for Ladas