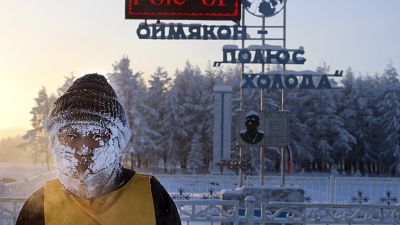 Tourists from all over the world have been braving the harsh temperatures for a chance to visit the coldest settlement in the world.

Attractions at the Siberian village of Oymyakon include an underground glacier called "Chinggis Khan cave" and taking a dip in an icy dip river.

With temperatures reaching minus 71 degrees Celsius from late September and remaining below freezing until mid-April, the village in Yakutia has been dubbed the "Pole of Cold."

"For us, for Europeans, it is new! There are no such conditions anywhere except here. Of course, it is extreme, but we like it," says French tourist, Dominique Maio.

Horse riding is also a highlight for visitors, as horses can survive without shelter in severe frosts as they have long coats and the ability to graze on vegetation that is under deep snow cover.

But horse riders can help make their lives more comfortable in the village where temperatures can remain below zero for around 200 days.

"They explained to us that if you remove the snow from them, then they will be warm and good," said one tourist.

The harsh cold climate permeates nearly every aspect of existence for the 500 people who live in the area.

Frostbite is a constant danger, and cars are usually kept running even when not being used, to prevent their batteries from dying in low temperatures.

The winter diet is mostly meat-based, sometimes eaten raw or frozen, due to the inability to grow crops in the extremely low temperatures.

The village in the remote outpost of Siberia recorded an all-time low of -72 degrees Celsius (-97.6 Fahrenheit) in 2013.