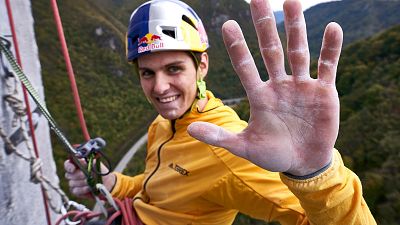 The Trbovlje Chimney towers 360m into the Slovenian sky. It's the tallest in Europe and climbers Janja Garnbret and Domen Skofic recently scaled the full length in an impressive feat of bravery and determination.

The route had 13 pitches, with the most difficult - pitch 10 - graded 8b+, an elite level of climb, especially hundreds of metres above the ground. It's comprised of 800 holds, which collectively weighed over two tonnes. The course was designed by licenced Slovenian route setters, Katja Vidmar and Simon Margon.

Trbovlje Power Station was a lignite-fired power station on the bank of the Sava River near Trbovlje, Slovenia. The plant ceased operation in 2014, after nearly 100 years of production. However, the chimney remains standing - and has been transformed into the longest climbing route in the world.

Two of the world's best sport climbers, Garnbret and Skofic first attempted the climb in autumn 2020. This 12 hour mission was discounted because of too many falls. But this time round, their second attempt, they successfully completed the climb in 7.5 hours.

See them complete the challenge by pressing play.

Would you spend the night on this Peruvian mountain edge?