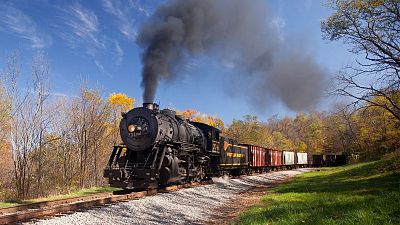 Travelling by train allows you to take in the landscape around you, rather than just getting from A to B as you do on a flight. It also means your next trip won't max out your carbon footprint, as trains emit a huge 90% less emissions than planes.

So sit back, relax and enjoy a journey through Europe, powered by nothing more than steam.

Named "Britain's most luxurious train" or the “the Grand Duchess of luxury trains" trips on the Northern Belle were launched in 2000.

The oldest of its 7 ornately-decorated 1930s-style Pullman carriages, named The Duart, was once used by the British Queen as part of her Royal Train.

All of its carriages bear the name of a great British castle or stately home. The train was restored by some of the UK's top craftspeople, including marquetry experts, muralists, and mosaic artists.

The Northern Belle offers several steam-powered journeys, with the carriages hauled by one of five black steam engines, including the 88-year-old locomotive, “Princess Elizabeth”.

Known as "Lizzie" it was named after a then young Princess later to become Britain's Queen Elizabeth II.

The train usually carries up to 300 passengers but social distancing rules mean that it will only carry about two-thirds of its usual passengers when it runs in April.

Tickets for a sold-out trip to Edinburgh in April cost €356. Passengers are served a glass of champagne after boarding the train at Derby, eastern England, before a three-course brunch followed by coffee on the outward journey.

For the journey home, passengers are served champagne when they re-board the train, followed by a five-course gourmet dinner made from the finest seasonal ingredients from the British Isles, with wine.

Europe’s oldest coal-fired steam engine has been carrying passengers from Jenbach past alpine meadows and forests up to the shores of Lake Achensee since the late 1800s.

The 6.8km trip in the Austrian Tirol tackles 440 metres of elevation. When you reach the top you can catch a steamboat from the lake to continue the panoramic journey.

The Furka steam line is the second highest railway in Switzerland, after the Bernina Railway. It chugs along between the pretty villages of Realp in Uri and Oberwald in Valais, crossing the magnificent mountain landscape of the Central Alps and offering views of the impressive 8 km long Rhone Glacier. The intermediate stop at Furka station takes travellers to the routes highest point of 2160 metres.

A 13-kilometre trip between Anduze and Saint-Jean-du-Gard in old open-air carriages is a unique way to enjoy the Provence countryside.

The Cévennes Steam Train carries passengers along viaducts above the Gardon river, stopping to visit the botanic gardens of La Bambouseraie, 2km before Anduze.

Take a trip through Amsterdam's tulip-filled countryside on a steam 'tram' from Hoorn’s railway museum to Medemblik.

You can continue from Medemblik with a picturesque boat trip across the IJsselmeer Lake to Enkhuizen, and then catch a modern train back to Hoorn to complete the journey, known as the ‘historic triangle.’

Named after the highest peak in the range in central Germany, Brocken first started running in the 1890s but was closed after being damaged during World War II. During the erection of the Berlin Wall, it was used as a military base and its railroad transported supplies. The railroad was reopened for passenger use in 1992, following the reunification of Germany.

The Brienz Rothorn Railway is not only one of the steepest railroads in Switzerland, but it is also powered almost entirely by steam engines.

Passing through some spectacular scenery on its route from Brienz it travels 7.2km to the peak of Rothorn Mountain at 2244 meters.

The Brienz Rothorn Bahn first came into use in 1892, and from 1953 to 1990 is was the only cogwheel railway that was fully steam-operated in Switzerland.

Are you a fan of train travel? What's your favourite route in Europe? Share your stories and photos with us over on Instagram.