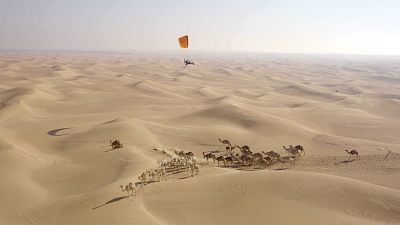 The most populous city in the United Arab Emirates boasts a multitude of attractions for adventure travellers, including air, sand and sea activities.

Dubai is known for its glamorous sky-piercing towers but these high-rise buildings are now being utilised as a playground for the brave.

Thrill-seekers can launch themselves down a zipline from a 170-metre high skyscraper across the marina.

Passing bridges, boats and people below they can reach speeds of 80km/h before stopping just above the ground.

This zipline is operated by 'XDubai', which continues to push boundaries and fuel adrenaline junkies with stunts such as the 'Jetpack man' and wingsuits, that allow you to fly between skyscrapers.

For those seeking speed at breathtaking heights, you can find the world's largest zip line just an hour's drive away from Dubai in the neighbouring Emirate of Ras Al-Khaimah.

The record-breaking zipline crosses a distance of almost 3 kilometres and reaches death-defying speeds of 120km/h.

Paramotoring has also become popular as a growing number of people find solace up high in the clouds.

Equipped with a large paragliding wing, the paramotor is propelled into the sky, reaching heights of 3000ft.

Powered only by a 25HP petrol engine, the agile paramotor is steered with only two chords, much in the same way that a parachute is.

If daredevils are more enticed by water sports, E-foiling will be right up their lane. The new trend is powered by a silent electric motor whereby the hydrofoil lifts the surfer above the water and effortlessly lets them glide above the water.

For those who want to dive deeper into the marina on a shark-resembling machine, the Seabreacher is the newest toy that gives an adrenaline rush.

The machine sits two people and can dive around six feet underwater before breaching the surface where it can reach speeds of 80km/h.

For those seeking their thrills on land and have deep pockets, driving an F1 car is a must-do to cross off the bucket list.

It’s now available for anyone with the confidence to drive the high-octane machine but beware, it comes at a hefty cost of around €5,000.

Dubai breaks the record for the world's largest fountain