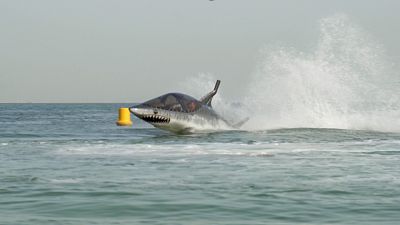 In this episode of Adventure, Euronews went on an exhilarating ride in a Seabreacher and tried out flyboarding at Jumeirah Beach in Dubai.

The Seabreacher looks like a shark, it can dive, cut through waves - and with a 300 horsepower engine, can go at speeds of around 95km per hour.

The boat-like watercraft took over ten years of meticulous engineering and extensive testing before it was made available to the public to try.

Now the experience is on the market, people can also hop in either the 'shark x model', a 'killer whale y model', or a 'dolphin style z model'.

The vessel’s sculpted body presents an unforgettable sight, like the twisted union of a marine mammal and a high performance fighter jet. The acrylic canopy and underwater view ports give pilot and passenger a near 360 degree view as they fly through the water at breathtaking speed.

After trying out the Seabreacher, Euronews' James O'Hagan opted for his next exhilarating watersports activity in Dubai - flyboarding.

Flyboarding is another extreme sport that will take you to new heights and make you feel like an action hero as you blast up into the air.

Water is forced under pressure to a pair of boots with jet nozzles underneath which provide thrust for the rider to fly up to 22 m (72 ft) in the air or to dive headlong through the water down as far as one is willing to go.

Pro golfer Amy Boulden on how to improve your golf game