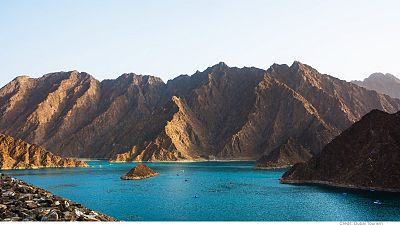 Welcome to Hatta, where a rugged, mountainous landscape, cooler climate and abundant outdoor adventure activities await. This is an inland exclave of Dubai, about 130 kilometres south east of the main city boundaries, sitting on the border with Oman by the beautiful Hajar Mountains.

Hatta formerly belonged to Oman, but in 1850 was given to Dubai. Despite this, it still has more in common with the laidback Omani lifestyle than the fast-paced routines the emirate’s residents are used to. Today, although many people do live in Hatta, it is best known as a family-friendly weekend escape, as it is less than a two-hour drive from the hustle and bustle of the city.

In the last couple of years, there has been a major push towards adventure tourism in Hatta, and it’s quickly become a go-to spot for hiking, mountain biking, kayaking and more.

There are a number of hotels in the area, including the famed four-star JA Hatta Fort Hotel. It’s the oldest such property in Hatta, but recently underwent a complete refurbishment, now offering bright and airy, contemporary-styled rooms, a couple of impressive restaurants and all sorts of on-site activities, from mini golf to archery. The place still retains its down-to-earth, old world charm, however, thanks to its friendly staff and spectacular location.

Elsewhere, there’s Sedr Trailers Resort which features repurposed trailers that have been turned into hotel accommodation, the first of its kind in the region, equipped with a fire pit and barbecue facilities. It’s perfect for friends and families looking to enjoy a night or two under the stars, surrounded by a dramatic, arid landscape.

Similarly, there are the Damani Lodges, purpose-built lodges that each have a private terrace and all the trimmings of a modern hotel room, complete with Wi-Fi and a TV, but without the five-star frills. These overlook the Hatta Wadi Hub activity park, where visitors flock each weekend to enjoy adventure sports. These include mountain biking, downhill carting, hiking, axe throwing, archery, kayaking and even zorbing – rolling downhill inside a giant inflatable orb.

Nearby is the Hatta Dam, where visitors can rent kayaks, water bikes, donut boats or pedalos and enjoy a peaceful hour or two floating on its azure waters. This is a must-do and accessible via the Sedr Trailers Resort.

For something a little less active, tourists may also want to explore the Hatta Heritage Village, one of the oldest restored traditional villages in the UAE, dating back to the third century BC. It features two watchtowers, a majlis and a fort, as well as a collection of black and white photographs that offer a glimpse into what life in Hatta used to be like.

Another leisurely way to while away a few hours is at the Hatta Honey Bee Garden, the region’s first queen bee rearing station. There are tours offered, where experts educate visitors on the life of bees and their conservation efforts, and allow them to get up close with the insects and their hives. They also run workshops, including candle-making or beehive frame-building sessions.

Wildlife enthusiasts will also want to check out the Hatta Mountain Conservation Reserve, which is home to the UAE’s largest population of the endangered Arabian Tahr (a species related to the wild goat). While security clearance from the municipality is needed to enter the reserve, the areas around the dams are open to the public. There, visitors can hike through the rugged terrain, as they keep their eyes peeled for the elusive tahr.