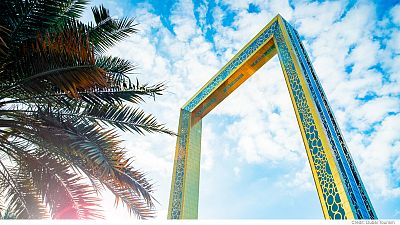 Nearly 100 per cent of the UAE’s population uses social media – and one of the most popular platforms is Instagram. So there’s no wonder then that this is a city geared up for envy-inducing selfies. From the towering, futuristic skyscrapers of Business Bay, to the street art-clad streets of old Dubai and all those record-breaking buildings and attractions in between, these are the best spots you can – and should – go with your camera.

No trip to Dubai would be complete without a picture of yourself standing in front of the world’s tallest tower. The Burj Khalifa, which rises above Dubai’s skyline at a whopping 828 metres, offers the perfect backdrop to any holiday snaps, but a trip inside wouldn’t go amiss, either. In particular, head to floors 152 to 154, to the world’s highest lounge, where you can also have an afternoon tea, or some cocktails and champagne.

This newly opened island is home to five-star hotels, plenty of shops, bars and restaurants, with views of the sea and a bustling boardwalk. It’s also where you’ll find the world’s tallest observation wheel, which is 80 metres taller than the current record-holder, the High Roller in Las Vegas. You can see Ain Dubai, as it’s called, in all its glory right now, but you’ll have to wait until next year before it’s operative, in time for Expo 2020. It still makes for a great photo opportunity, though.

One might not think a visit to a shopping centre is the stuff of Insta-dreams, but as this is one of the world’s largest malls you can think again. There are myriad photo opportunities waiting for you inside its vast corridors: such as the human-shaped sculptures that dive down a giant, cascading waterfall, or the Dubai Aquarium & Underwater Zoo, where thousands of aquatic animals swim about. Outside, there’s the world’s largest performing fountain: perfectly choreographed performances take place every 30 minutes to a range of popular music. You might want to get the video function ready for that one.

You can laze about by the beach, eat food at a restaurant or have some cocktails at a bar, even hit the waterpark here, but one of the best things about this seafront leisure and entertainment destination is how pretty it is. There are some beautifully decorated walls around the area, where local artists have painted brightly coloured murals, just waiting for visitors to pose in front of.

Move away from all the world’s tallest and largest attractions, and take a step back in time, to a simpler way of life. That’s what old Dubai is all about: from the Al Fahidi Historical District, where museums and galleries hide among labyrinthine alleyways and coral-clad heritage houses, to Satwa, where there are plenty of cheap-and-cheerful, hole-in-the-wall-style eateries and giant walls of graffiti. You’ll definitely want to grab an abra – a water taxi – across the Dubai Creek, too. It costs just Dh1 (€0.2) to get from Bur Dubai to Deira (or vice versa), and there are fantastic souqs – selling everything from spices to gold and textiles – on both sides. It’s also a great opportunity for a Boomerang.

This record-breaking attraction was quite literally built with photography in mind, as the 150-metre-high structure frames the city beautifully. Once you’ve zoomed up 48 floors, to the top of the world’s largest picture frame (it takes 75 seconds in the lift), you’ll see the hotch-potch of old Dubai on one side and the gleaming, contemporary skyline of the new city on the other. There’s no view in the emirate quite like it. At the base, a small museum takes you through the history of Dubai, and its ambitious plans for the future. It’s all about bridging the past, present and future here.

This is a 72,000-square-metre garden featuring millions of plants and flowers. It’s also the largest of its kind in the world, naturally. Every year from mid-November to mid-May, the space opens up, with a medley of quirky attractions and perfectly landscaped lawns, showing off incredible topiary skills. A couple of particularly impressive features worth checking out include the 18-metre-high Mickey Mouse floral edifice, which in 2019 earned the Guinness World Record for the world’s largest topiary structure. There’s also a life-sized replica of an Emirates Airbus A380 covered in thousands upon thousands of blooms.

You can’t talk about Arabia without mentioning its deserts – and Dubai has some simply stunning rolling dunes. Plenty of tour operators throughout the city offer trips into the desert, where you can eat a meal in a Bedouin-style heritage camp, don national dress, ride camels and even go on a dune-buggy adventure. Such an experience sets you up nicely for some picture-perfect moments in the Middle East.

Arabian-style architecture, Venetian-inspired waterways and the Burj Al Arab in the distance is what makes Souk Madinat Jumeirah a great spot for selfies. It’s a pretty authentic recreation of an ancient marketplace, with traditional Middle Eastern vibes, but also plenty of more modern restaurants and bars to keep you busy. You can roam around its pathways for hours, checking out the souvenirs and soaking up the atmosphere. Outside, you can even go for a gondola ride.

It’d be difficult to choose just one Instagrammable café in Dubai, as there are just so many – where the beautifully plated food is as picture-perfect as the interiors. For instance, Tania’s Teahouse is a foliage-strewn haven of millennial pink and clever puns, with things like mermaid toast and cake-in-a-teacup on the menu. Cute little Japanese bakery Yamanote Atelier is another go-to for kawaii-loving Instagrammers, thanks to the pretty pastries (think a Hello Kitty-shaped treat stuffed with light chocolate and custard cream). For something more edgy, hit Vibe in Jumeirah 1, where motivational sayings adorn the walls in bright-pink neon and there’s a Drake-created smoothie on the menu.