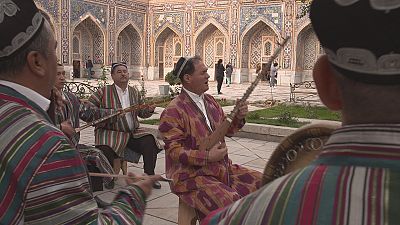 Camel caravans once stopped in Samarkand on their way from China to Europe. In the first edition of “Uzbekistan Life” we trace the legacy of the legendary Silk Road and explore how it still influences the city today.

Samarkand was in a perfect position on the network of roads which once weaved along 10,000 kms. For two thousand years thousands of merchants, diplomats, pilgrims, warriors and others passed though this city, leaving their foot prints behind them.

“The main mission of the merchants who came here from different parts of the world in different times was besides bringing their best commodities the constant desire for knowledge, for exchange of new revolutionary ideas, the exchange of cultures, traditions, religions and languages.” says Armida Nazaryan, guide.

Amongst those new ideas was the art of paper-making, from China. The secret technique travelled to Samarkand and local craftsmen developed it further. The famous silk-paper made from mulberry bark, was then exported worldwide.

Zarif Muhtarov made his dream come true when he revived this lost art of paper-making. He still uses the traditional 1,000 year old technique in his workshop with its wooden watermill:

“People recognized paper from Samarkand by its unique sound.”

The paper is renowned for its exquisite quality and called silk-paper because of its smooth, shiny surface. Many 9th and 10th century Arabic and Persian manuscripts were written on it.

“Only emirs, sultans and viziers could afford this paper. That is why it is also known as royal paper.” he says. “When I hold this paper in my hands I feel like I’m holding a treasure, a world treasure. The silk road caravans exported this paper to Asia, the East and Europe.”

Most trading was done in the city’s many bazaars. Today they are as busy as ever. The culinary ingredients imported to Samarkand were incorporated into the city’s cuisines, reflecting a melting pot of cultures, and the “flavour of Samarkand” is still in the air.

“The Great Silk Road brought us spices like nutmeg, cloves and black pepper.”

Trade in spices, silk, porcelain, fine carpets and weapons played an important role but music and instruments were also exchanged.

Bobur Sharipov is on his way to collect his new Rubab.

A rubab looks a bit like a lute, and is made from mulberry wood. It has five strings and is covered with fish skin.

“This is my Rubab. This instrument was spread via the Great Silk Road to the different countries of Central Asia.” he says.

It takes up to twelve months to carve one of this country’s musical treasures.

“These songs reflect our rich history and inspire my soul.” says Bobur.

Continuing along the Silk Road, we’re on the way to Bukhara, another big centre on the historical trade route. In the next edition of “Uzbekistan Life” we visit the ancient city and explore its rich heritage of local handicrafts.