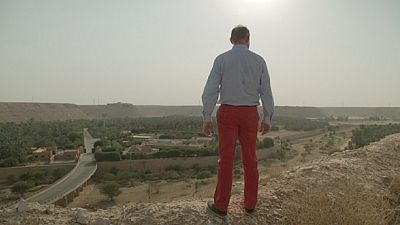 The farmer shimmied up the palm tree barefooted a rope around his waist. Then picking the clump of dates from on high threw them down at me. “Eat them, eat them,” he bellowed from above. Christmases came back to mind. Dates then were a seasonal treat packed in a box which included a small plastic fork. A picture on the outside, some Arabic writing and in bold letters the invitation – EAT ME.

Here on the banks of the Wadi Hanifah on the outskirts of Riyadh I had the choice of dozens of fresh dates. What a taste, what a sensation and far removed from those annual treats. Think caramel, a touch of honey, a consistency of fudge with a little sweetness and if you ever get the chance to eat them fresh the challenge is to stop!

The Wadi Hanifah is a valley which runs for 120 kilometres from north to south through Riyadh the capital of Saudi Arabia. It had fallen into neglect and become a dumping ground for domestic and commercial waste.

For the past ten years it has been having a make over. It is still a work in progress. Benefits have been far reaching not least for the many date farmers who line the banks of the valley. A re-designed road system means it as quick to get there as to one of the many markets in the city .

And after a snack of those tasty dates we were off to the bio remediation plant, an architectural delight at the heart of the valley. It’s the first of its kind in the world and is nature’s way of cleaning toxic water. The methods are not new with fish, trees, algae and oxygen all play their part in the cleaning up process – literally eating up the nasty nutrients in the water. Such a plant has never been built on this scale before.

It flows into the area set out in a herringue bone pattern of ponds and six hours later the water drains out crystal clear.

It’s another example in the Wadi of a project which has brought one of Riyadh’s greatest natural environmental resources back to life.