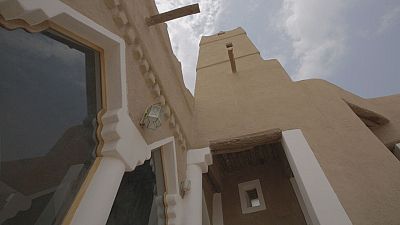 Addiriyah is a symbol of Saudi Arabia’s rich history and a restoration project is underway to create a beacon for its future.

This was the capital of the first Saudi state. It was here in 1744 that the first head of the house of Saud joined forces with religious leader Sheikh Muhammad bin Abdulwahab – a pact which fused politics and Islam and turned Addiriyah into a centre of power and knowledge.

But in 1818 Ottoman forces laid siege to the city, the rulers fled to create a new capital called Riyadh and the history of Saudi Arabia took a sharp turn.

The area lay abandoned until in 2000 the Addiriyah Development Authority was tasked with implementing a major restoration project.

Several buildings have already been completed including the historical al Dhuwaihrah Mosque.

The restoration project is a delicate one. One focus was on making it new while still maintaining the old traditional methods like using mud and straw to build the walls of buildings.

The traditional materials are made on site using long forgotten skills which had to be re-learned from a variety of sources.

“You know it’s a special work, working with mud, it is not a normal type of work but a specialist skill. We collect some information from some books and we used consultants also. We are learning from them. We became professional. They can do this work with their eyes closed now,” said Ahmed Abdul Hamid, the senior site engineer.

The process begins by mixing the ingredients – soil, straw and water. The mud is then left to ferment out in the open.

This is a critical stage as it determines the consistency of the material. That is vital when it comes to working the mixture into bricks.

The most significant area within Addiriyah, the At-Turaif district was declared a UNESCO World Heritage Site in 2010

It includes the royal Salwa Palace, the seat of the leaders of the House of Saud who ruled over the first Saudi state. Valuable evidence of life in Addiriyah and its fall to the Ottoman forces was unearthed during an extensive archaeological dig.

When restorations are complete, the At-Turaif district will become an open air museum. Across the valley are a number of newly designed buildings yet to be completed, including a visitors centre. The two areas will eventually be linked by a footbridge.

Landscaping around the site has created valuable green space already being used by the people of Addiriyah.

“I will always be proud to be among the first people who come here. I am proud of our heritage. It teaches our children about our ancient history up to the contemporary days,” said Ibrahim, a local visitor to the park.

And its hoped Addiriyah will one day become a destination for visitors from outside the kingdom.

“Starting from here you can understand the tradition of the Saudi Arabian people, their way of life, their culture. That’s very important to understand the country. So I think this work is very significant,” said Fu Lihua, a visitor from China.

Mud and straw - the future for The Kingdom's first capital