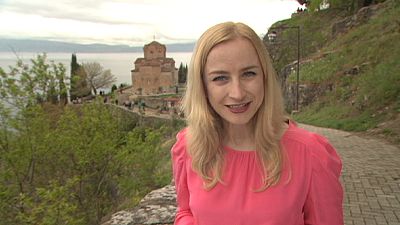 Ohrid is a fascinating city where you can a real feel of bygone centuries. We started our shoot at the beautiful Saint Jovan Kaneo church, a wonderful little gem built in the 13th century, set on a cliff overlooking Lake Ohrid. We were lucky because the archbishop was holding a special Easter ceremony and we were able to stay for a while. The chanting was captivating and I could imagine how bishops used to hold the same ceremonies centuries ago.

We also met art historian Milcho Georgievski who is passionate about Ohrid and its history. He told us that around half the male population are called either Naum or Clement. Both names have been very significant during the city’s past. Clement is reputed to be the founder of the first Slavic university. Around the turn of the 9th and 10th centuries, he simplified Cyrillic script so it became much as we know it today. Naum was a missionary and the breathtaking monastery he founded is situated on the lakeside.

We also met an archeologist who showed us an astonishing discovery: a Roman house dating from the 1st century BC. It even has a hot bath. It was a revolutionary discovery as experts never expected to find a Roman bath like that, belonging to a rich family in that area of Ohrid. The mosaic, made of white and black stones, is the only one of its kind found in the country. We visited a excavation site where they are searching for more archaeological treasures. It was fascinating to observe how around 60 workers were digging carefully through the ground.

The frescos and wall paintings in the churches of Ohrid are stunningly beautiful. We wanted to find out how these masterpieces can be restored. We visited Vlado Mukovski, who has been a restoration worker for more than 16 years. He spent a year studying in Florence and is very passionate about the wall paintings he restores. He told us that every wall painting has its own soul and that you need to go to the place where it has been taken from to breath the atmosphere in order to restore it as it was. I was surprised that they only use water colours because they must be easily removed.

We also found out why all these wall paintings have been preserved so well over the centuries. When the Turkish came, they painted over the works and that served as a protection. In the 50s when scientists were taking off the layers, they were stunned to find that the pictures underneath were in such good condition.

The famous and delicious Ohrid trout